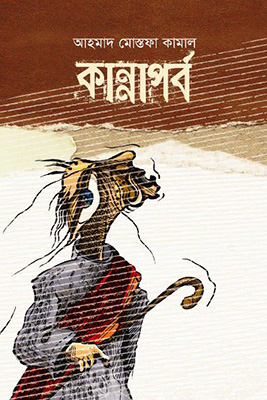 Ahmad Mostafa Kamal (b. 1969) has already earned a reputation in the literary world of Bangladesh for bagging two major awards. His fourth volume of short stories named ‘Ghorvorti Manush Othoba Noishobdo’ (A Manful Room or Silence) brought him the much talked ‘Prothom Alo Borshosera Boi 1413’ (Best Book Award of the Year 2007) and his second novel ‘Ondho Jadukor’ (The Blind Magician) led him to win the prestigious ‘HSBC-Kali O Kalam Award 2009’. In the book fair of 2012, two of Kamal’s novels came out amongst which ‘KannaPorbo’ (Ballad of Tears) can overwhelm any reader for its treatment of a social phenomenon along with the narratology that the novelist manipulates.

Kamal, a professor at the Independent University, Dhaka started his authorial career in the early 90s of the last century. In 1998, his first book ‘Dwitiyo Manush’ (The Second Man), a collection of short stories, came into light. Till date he has authored six volumes of short stories, four novels, and two books of essays.

If asked, what the novel ‘KannaPorbo’ focuses on, the answer would possibly be that it tells about a woman who is an actress in the traditional theatre groups called Jatra Party. However, this answer would not be completely true as the book is certainly more than just that. It is about the sorrows and agonies faced by the people associated with the Jatra Parties. It is the unheard crying of the lost heritage which had once enriched the traditional Bengal. And to do so the fictionist has nominated some interior villages of Manikgonj district, an area on the banks of the rivers Padma and Kaliganga where the folk beliefs got enriched for long.

The novel opens with the news about the missing youth – a Jatra actress named Sujata alias Maloti. The news was made public because of the pivotal role of an emerging youth writer named Hasib Jamal, who was based in Dhaka but had roots in Manikgonj. Gradually, throughout the course of the book it becomes clear that the girl was a victim of the local MP’s lecherous son. It is also told that she was been compelled to behave according to his desires and he wishes never to return her. With the news the readers begin to enter into the story of the book and gradually the entrance becomes a discovery. We discover the people of the Rishipara, from where Maloti hails and we become able to feel the unheard sighs of those people. The idol-artistes, the mridongo-player or the cornet-blower represent the millennium-old culture of the Bengal zone.

As a part of the main plot, very immediately we meet Modhubabu, the authority of the theatre group. He possesses a great love and responsibility for all the people of his troupe. Behind all these salient features, Modhubabu has a long history of getting involved in the Jatra. The craving that he has nourished for years to form a Jatra party as a part of promoting performing arts made him leave everything on earth and live with the Jatra. It was and also is his love for which his stage performers can excel many artistes of television and other media. Ahmad Mostafa Kamal has delineated the inner affinity of Modhubabu and others like him who preserve a sincere and deep-rooted craving for the art-forms of ancient Bengal. And the novelist has masterly sketched them in an efficient manner. Let us not forget that the people whom Kamal draws are almost of the downtrodden subaltern agrarian society and have the richness of a long history of heritage.

Thus, Kamal has brought forth the sobbing of those outcaste people. A very keen observation and a true realisation have helped him to penetrate the throbs from a very historic perspective mingled with a touch of tradition. Very skillfully he has fused the many subplots and those have been done so meticulously that readers cannot make any clear demarcation between the main plot and the rest ones. But they altogether form a unity and demonstrate the essence that the youth novelist wants to present.

Ahmad Mostafa Kamal, or Hasib Jamal, or the youths of Manikgonj district town aimed to sketch the lost heritage that their areas once had. In order to do so, they altogether begin with Maloti’s story and from her to Haricharan, Maloti’s father story and from him to all the people of their community. Thus ‘KannaPorbo’ becomes a demonstration of the blending of spiritual and intellectual merits of that soil. The episodes of Joideb Kaka, Asad Bhai of Bathoimuri Dorber Sharif, or Poran Dadu, or Haricharan imprint a long-lasting impression on the readers’ mind.

And what about the episode involving Borun Kundu? His fascinating interaction with the local boys gives birth to Putul’s story – the story of his beloved daughter. While shifting through the engrossing chapters of this book, readers are acquainted with Moinuddin’s increasing affection for Putul. One night when he enters into the house of Borun Kundu, he is caught red handed by Borun Kundu who hands him over to the local elites for justice. After some days Moinuddin commits suicide by hanging. The youths believed that Borun did it because Moinuddin was a Muslim, but slowly it is found that Putul herself was a plotter of it and Borun did all these because Putul is a hermaphrodite.

No doubt, every reader will try to identify the use of magic realistic narratology in ‘KannaPorbo’. Sometimes, the narrator is a single person identified with the writer, some other times the role of the narrators are played by a group of youths from the town area, educated but unemployed, and sometimes the solo and chorus narrators get intermingle. In this regard, it could be noteworthy to cite the features of magic realism as stated by J. A. Cuddon in ‘Dictionary of Literary Terms and Literary Theories’. Skillful time shifts, convoluted and even labyrinthine narratives and plots, elements of surprise and abrupt shock are some of the features that Cuddon pointed and those features could be very easily discovered in the narration of ‘KannaPorbo’. But let us not forget that above all it is not a novel of the magic realistic genre as it does not portray the real in a fantastic, bizarre and fairy tale ways.

But it must not be denied that the narrative technique that Kamal has used in the novel has added greatly to the excellence of the book and thus it has emerged as a nice read to the literati. I am sure ‘KannaPorbo’ will draw a greater readership and thus will be able to satiate everyone who takes time out to read this true delight of a book.