Home Reviews Looking for Pearls in an Oyster

Looking for Pearls in an Oyster 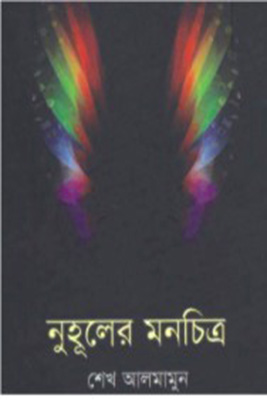 ‘If I am asked, “What is or what should be your philosophy of life?” I’ll simply reply, “This universe is the expression of unadulterated and unfathomable love. That ‘love’ is the single reason of the expression of me too. So, my only philosophy is to realise that love and spread it as much as possible. My appearance on this earth is also for this. … The height of a man can be measured with the power and sphere of his love.’ Nuhul, the protagonist of the debut novel Nuhuler Monchitro by Sk. Almamun expresses his ideologies this way. Yes, no doubt, it sounds really very philosophical which the novel abounds wholeheartedly.

The novel opens with Nuhul, in an illusive mental state. And gradually he delves into his childhood days to the recent present. At such moment when the writer attempts to present the formation of Nuhul in his early life, we find Tarab, Nuhul’s father states his own. The beautiful picturization of Tarab’s childhood and adolescence are related, with concomitant disputes and dilemmas.

In the beginning comes the dilemma between Bangali’s and Nolua’s. Tarab belongs to the ethnic group called ‘Nolua’ who are very few in number and live in a remote village of the district of Mymensingh. He is a descendant of ‘Nolua’ community whose profession is making household things from a type of bamboos called ‘noli’. Along with this Tarab gets entangled with two other conflicts: one is his interaction with David Morris, a European representative of the nearly Christian church, and the other is Tarab’s romantic involvement with a Garo girl, which actually is discouraged in his community.

Gradually we meet a philosophic man in Tarab who wants to discover the root of his community; and when he gets the clue that it might be in Orissa of India that he will come across people of his own community, Tarab loses little time in starting for the unknown place.

Returning from there, Tarab changes his profession and goes looking for pearls in the oysters. The story of Tarab proves really very interesting and it is instrumental in paving the way for his son Nuhul’s becoming a purely philosophic man. At the end of Tarab’s own story we find his resolute approach where he is determined to bring up his son as a different personality, unlike his fellow community members.

At the beginning of the novel, we get introduced to Nuhul talking to a person, in his spell, who seems to be the college girl he did not talk to but whom he had placed in his mind. Sometimes, it seems that the discourse that goes on with philosophical ideas and thoughts are actually the two different facets of Nuhul’s own self.

At a point it gradually becomes evident that Nuhul is actually looking for the answers of some questions – the questions that every individual tries to ask and find answers from his own. Nuhul, like many other individuals before him, is also trying to shape and reshape those answers that he has discovered from his own way of life. His plan is to publish those findings or answers in the book form not to become a popular writer, rather to give a true exposition of his discovery.

While engaged thus, Nuhul himself also begins with his early days when the intellect of an individual acquires shape and substance. Nuhul’s story includes his family and friends, but mostly his grandfather, classmate Siddique and Haridas Babu, who are in many respects different from his other acquaintances. But the incident that devastates Nuhul’s adolescence is his inevitable physical attachment with his Nrgis Apa, daughter of his eldest uncle. During this period, Nuhul learns the words like ‘Marxism’. He then leaves for Mymensingh to acquire college education.

The days spent at college, outside of his home, give a new shape to Nuhul’s mindscape. He develops the plan to write the book and so after graduation he settles in his own village and educates the children of his own community. But Nuhul’s plans are not received well by people around him – neither from his family nor his society. He eventually decides to spend some days in seclusion, out of the sight of all his acquaintances.

During the exile, Nuhul meets a sanyasin who teaches him how to control the six temptations – desire, anger, greed, pride, envy and disgrace. During his days there he gets introduced to the caves that teach man the ways how to control one’s own self. By the time Nuhul returns from the sanyasin, he is a changed man inwardly as well as outwardly. But the surrounding society cannot take him easily – some comment that he has been in the spiritual way, some call him a fake. On the other hand, the girl living inside his mind flashes frequently for which he again decides to leave the society for the cave. On his way from the cave on a boat trip, a nor’wester dishevels him, and eventually we find him floating on the muddy river shore, with some torn-up pages of his dairy which is in fact the manuscript of his long-planned book.

Bangla novel has produced thousands in the genre, but well designed and well written novels with necessary compactness along with linguistic fervour are very few. Syed Waliullah’s (1922-71) Kando Nodi Kando (1968) is possibly the one best example in this regard. Some novels by Kamalkumar Mazumder (1914-79), Amiyabhushan Mazumder (1918-2001), and Akhtaruzzaman Elias (1943-1997) could also be placed on the same list. The debut novel of Sk. Almamun Nuhuler Monchitro will possibly be a good instance in the long history of Bangla fiction.

Nuhuler Monchitro is the overlapping of ‘bildungsroman’ and philosophical novels. Every reader will possibly enjoy the way Sk. Almamun delineates the character of Nuhul. In this respect the other bildungsroman novels written in Bangla could be remembered. Bibhutibhushan Bandopadhyay’s (1894-1950) Pather Panchali and Humayun Azad’s (1948-2004) Sab Kichhu Bhenge Pare (All Things Fall Apart) are the best instances in this regard. Sulekha Sanyal’s (1928-62) Nobangkur or Akimun Rahman’s (b. 1959) Roktopunje Gethe Jaua Machhi are also worthy examples from woman’s point of view. Nuhuler Monchitro will increase the list, no doubt.

We have also come across novels that tell of philosophical ideologies. In this context the Bangla-speaking people will easily recall the name of Nausea by the French Novelist and Philosopher Jean Jack Sartre. Might be novels with similar vein having long talks on philosophical theories are scarcely seen in Bangla, but Nuhuler Monchitro could be considered a worthy one in this regard too. It is a good blending of a bildungsroman and a philosophical novel. If someone says against the long talk of Nuhul on his thoughts, the writer won’t possibly be able to defy it, but as a reader I must comment that the profound language and consistency will a help a reader to stick to those and enjoy.

The power of the novel starts from the cover page and persists right till the last one. The artwork by Sabyasachi Hazra shows a somewhat different image which actually relates to something supranatural. Even the dedication page signifies the bravura of the novelist by using the water shadow of his mother’s bust, an inconceivable boon done by any serious writer in Bangla language. All the fifteen divisions of the book have a small text of a front page, a gemlike thing, which could be citable for its brevity. The bearded longhaired face of the novelist in the last flap declares that he does not consider himself a writer till date.

No doubt, Nuhuler Monchitro is a very meticulous production by Sangbed. Error-free books are probably a rarity in Bangladesh’s publishing industry. But Pervez Hossain, the publisher, is deserving of appreciation for his diligent and good performance.