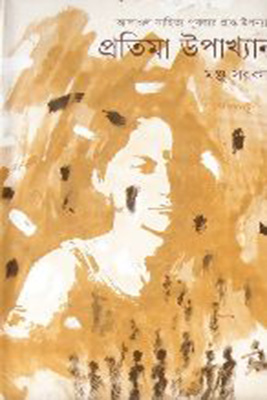 Categorising Monju Sarkar (b 1953) in the trend of popular fiction writers is not to disgrace him. We must admit that he does possess the power to see into the depth of life and to present his vision in a skillful way. Obinashi Ayojon (1982), a volume of short stories is the first book, which was credited to his merit. In the same time he began to encapsulate life in a larger canvass of which Tamosh (Darkness, 1984) is the first effort. The next novels that came from his pen are Nagno Agontuk (The Naked Guest, 1986), Protima Upakhyan (The Story of Protima, 1992), Dnarabar Jaiga (A Refuge, 1994), Abashbhumi (My Homeland, 1994), Bhangoner Somoy Bhalobasha (Love in Breaking Times, 1995), Omrita (1995), Taan (Attraction, 1996), Swapnochore (The Dream-Thief, 1997) etc. Though in his recent novels, Monju is failing to examine human mind and his surrounding in a very critical way, his earlier attempts were surely successful. In this regard Protima Upakhyan can be cited as a very significant instance.

What are there in this novel those have made it a worthy one? The presentation of the writer is very lucid and humorous with which he tries to portray the serious and tragic aspects of our social life. Monju Sarkar has emphasised two main things in this novel: gradual change in our society in the early 80’s as well as the situation and migration of the Hindu people in and from Bangladesh. Though it is a book of a very thin volume, it intermingles many of our social factors that can draw any reader. Monju has portrayed all these episodes in his unique presentation where his critical analysis takes a easy exposition along with humour.

Protima Upakhyan is a novel centring on love and the fact is there remains little narration of love in it. The information of the love affair is about Protima, a Hindu-Bhrahmin marriageable girl and Ahmed, a B.Sc. Muslim school teacher. Their novel opens with an assumed comment ‘Ahmad BSc + Protima’ that has been the most talked of issues of the village Bholarhat, situated in a remote place of the northern part of Bangladesh. Love between unmarried people always becomes a topic of huge talks in Bangladesh scenario with which has been added the difference of religion of the two person involved in the affair. But more than that sudden disappearance of Ahamd B.Sc. creates more controversy and different views. But the most significant element lies in the mystery of the writer – whether they are in love or not.

Monju Sarkar proves successful in holding the mystery of the story in a tense situation. He has been able to manipulate it because he has created the narrator of the book who himself is a writer. The writer lives in Dhaka, though his house is in one mile distance of Bholarhat. Being a writer, the narrator gets more freedom to comment on different situations and their development. Making the narrator a writer Monju gives him the right to penetrate more – which becomes more possible because he is acquainted with Ahmad or he can recognise Protima. The whole study of the unavoidable and significant changes become possible because the whole setting and its people are quite known to him.

The information regarding the love affair between Ahmad and Protima becomes clear when in a flashback we get Ahmad’s eager voice, “Ronjit, help me. I love Protima. I can’t survive without her’. This was a very frantic despairing utterance of Ahmad to Ronjit, Protima’s elder brother. Communist party worker Ronjit himself engaged Ahmad to help Protima in her studies at home. But when Protima’s mother could guess the trace of their love, she requested him not to come any more for which the painful utterance comes of Ahmad. Ronjit ignores Ahmad’s love for which Ahmad at last gives up his job of the school and leaves the village without any prior information even to the members of his family or any other one of the village. But his disappearance creates the turmoil.

Every thing turns upside down. Different comments begin to come; various guesses start to appear. The family of Ahmad begin to blame Ronjit for obliterating Ahmad, enemies begin to play their roles, politics began to be politicised. Ronjit confronts all these situation boldly because in the year 1971, like his other relatives and fellow people of Hindu communities, Ronjit did not return back as a shabby refugee rather his arrival was in the posture of a freedom fighter with a rifle. But Ronjit fails to combat all these very successfully – being victimised by the nasty politics he gets compelled to leave the country for India.
Monju Sarkar has treated all those political elements very skillfully. Components like Hiddu-Muslim relationship, pro-liberation and anti-liberation conflicts, mischievous tricks for grabbing other’s property are all intertwined up in the novel. It is also a novel where the good conscience of Bangladesh is entrapped by the evil socio-political milieu of the country.
What works as the final phase of the Ahmad-Protima story line? Before leaving the country Protima hands over a letter to Lalita, wife of Bocha Barman, a dependent on the Brahmin family. After getting known all about Protimita and her family’s migration to India, Ahmad returns back. Coincidentally he know about Protima’s letter but it could not be found out any how. The only sound then comes of Ahmed, “ I didn’t desire any evil to them. But why they’ve left the country.” By his words gets exposed the feeling of a true lover but the sorry saga is the feeling cannot move the social strata of ours.

The beneficiaries are all happy with what they have got. They are neither Hakimuddin, Ahmad’s father nor Bocha. Hakimuddin was instigated to voice against the Hindu Ronjit ; Bocha was inspired to talk ill about the Brahmin family but resultantly all benefits go in favour of Saraf Haji or the Chairman, Oaresa by name. Before leaving the country Ronjit met the Chairman who was once his co-fighter in the liberation war, but he does not care to save Ronjit because they are of two political lines now. At the end of the novel we see that the Brahmin-house has now been transformed into a Muslim house. The day after their departure Haji declares, “This house’s my own now. I won’t let any Hindu relic remain here.”

Monju Sarkar is very conscious of creating the characters in the novel. He has created Ronjit as a more conscious, patriotic and rebellious character who can burst before his father Abinash, “All the time you consider yourselves as the Hindus and in all your words you want to leave for India. For this reason people can dare to make traps to grab your households and properly. …Is this country only for the Muslims? Is it Haji’s father’s ? Didn’t we fight for this nation?” Such an utterance is really something very uncommon in Bangladesh. And Monju’s effort deserves praise because whom he has created in such a way has given the characteristic of a common man. For this Ronjit becomes incited to go to see obscene films in the newly arrived VCR of Samad, Haji’s son. Or this reason Ronjit gets attached to Lalita physically.

But what comes as the final message of the novel? Does that uphold the success of the conspirators? Monju Sarkar focuses light on it also. When the narrator of the novel asks Ranojit about the present retreating situation of the liberation spirit and Muslim-Hindu harmony, Ranojit retorts, “Middle class people like my father do not have the quality to exist in this society. Even if I compromise, I can not sustain their false aristocracy and pomp. I myself do not desire it. So I think it wiser to leave them in India. As I left my parents in India during the liberation period and returned back to fight, I will be back in the same manner this time also. We pardoned the orthodox radical people after 1971, but now without annihilating these demons we won’t be able to make forward to socialism”. These words of Ronjit enlighten the future hope of the nation. But along with that Protima Upakhyan establishes the genuineness of love also. Ahmad’s sincerity to the prestige of Protima is really noticeable. What more draws the notice of the readers is that the common people of the country are non-communal and co-operative to each other irrespective of creed and religion. None of Oares Chairman or Saraf Haji gives Bocha and his family shelter, they get shelter at Jomshed’s, a similar one like Ronjit in respect of their social position.