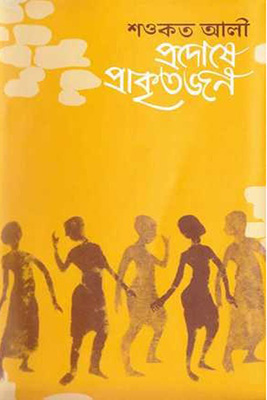 Shawkat Ali (b 1936), a major contemporary writer of Bangladesh, has been contributing to Bangla fiction enormously for the last four decades. Both in novels and short stories he has established his place with much glory. His fiction touches every sphere of life of our country. The great liberation war is an important subject of his writing. He prefers to deal with historical time also. Prodoshe Praakritajon (The Indigenes in the Twilight, 1984) is a great success in his writing about the society of Bangla of the middle age. It is a remarkable one in this area of whole Bangla literature also.

Prodoshe Praakritajon focuses light on the transitional years when the old and unable king Laksman Sen proved himself unfit on the throne of Navadwip and the Muslim rulers were trying to find out a way to grasp this territory. Shawkat Ali has delineated this significant period in the socio-politco-religious context of the whole Bangla. And the writer’s competence is in his manipulating the whole situation in a true way through a love story setting. Moreover he has done it from a very humanitarian point of view. After the completion of the novel a reader only visualizes the human being in a eight hundred year back Bangali society, neither the politics nor the religion. For this reason, possible, the writer has rightly used the word Praakritajon i.e. the common folk in the title of the novel.
The novel opens with Shyamango. Shyamango is frustrated and so he is on his way home from his Gurudeb’s. Professionally Shyamango is a potter, but he is more an artist. Seeing Shamango’s skill Guru Basudev himself gave him the chance to work under a Mahasamanta i.e. Lord Sudhimitra for a temple. But the total situation went upside down. They did not let him work keeping pace with his imagination. Time and again Shyamango’s skill, coupled with imagination, turns to make human figure that show the love and sorrow and joy of common man and for this he was sacked from his job which in other words narrates the emptiness of artistic practice by Bhahmanism. It was also informed to Shyamago that Guru Basudev was also compelled to work according to his masters, not according to his own imagination. Resultantly he tells Shyamango ‘Aren’t you a young man? You have unfathomable power – why do you beg for kindness? Does artistry ever depend on others? Don’t you know what artistry is!’

On his way back at Ujbut of the ancient Gauda i.e. the North Bengal, Shyamango meets two young women roaming – Mayabati and Lilabati. Meanwhile from the description of the writer and the characters, gradually the landscape of the story emerges. Shyamango takes shelter at Mayabati’s. There he gets acquainted with Sukdev, Mayabati’s father and Dinadas, Mayabati’s maternal uncle. Hearing the arrival of a visitor neighbours from surrounding houses gather. While talking with them Shyamango knows two things: (a) Buddhist monks are arriving in the nearby areas and (b) a rumour goes that Javan (Muslim) horse-traders from the west are seen in the markets very often. Thus in a very meticulous threading of the politico-religious history of the past Bangla emerges through a socio-familial story.

Every conscious reader of history imagines the foreground and significance of these two information. Due to the heavy suppression and oppression by the Bhrahmins the Buddhist community, who were once driven away from this region, again try to unite. On the other hand it was the outset of Muslim arrival, through both religious and royal ways, in Gauda. Rituals of Islam create multifarious talks among the local people.
At night Mayabati and Lialbati enter Shyamango’s room and Mayabati requests him to collect information about Lilabati’s husband Abhimanyu Das of Amrapattali. From this exciting scene it becomes clear why Mayabati was eager to give Shyamango shelter for that night in their house. Next morning Shyamango leaves their house. At his departure Jogamaya, Mayabati’s mother, becomes sentimental remembering her dead son whom Shyamago takes after. Moreover in the episode we can know about Basantadas, Mayabati’s husband who is missing for about seven months. On the outskirts of the village Shyamago again meets Lilabati and from the small talks with her fails to discover her real attitude towards her husband and conjugal life. Shyamango expresses his firm desire to visit the village in future. We can realize that these two characters are getting entangled.

Lilabati returns home. There with her father Harakanta we meet a new comer who is a maternal uncle of Lialbati. His only son was once drowned by the kshatria men and resultantly his wife became mad. At last he became a Buddhist monk. He says ‘Everything has gone beyond the control of the great king Lakshman Sen – no one will be able to protect him. His fall is a matter of time only’ .

Meanwhile the reader gets the bygone history of Lilabati’s marriage life. Her husband Abhimanyu Das was an idiosyncratic person. On the wedding night cupping Lilabati’s face in his hands he only uttered, ‘I don’t believe, I don’t believe.’. Even in the tumultuous state of the country Lilabati does not want to return to her lunatic and idiotic husband.
In the meantime there occurred a very dangerous incident at Pippali Haat. Feudal chieftain Harisen’s right hand man Brajasen was killed as he behaved very roughly and cruelly while collecting tax. In rage Harisen burnt the people concerned with the incident very inhumanly. People who became prey of Harisen’s fury were either common village folk or Buddhist monk. This incident shows the utmost limit of the feudal rulers under Lakshman Sen. On the other hand the outcast and the Buddhist followers completely lost their hope and thus began to turn to Islam, by then known as a religion of peace.

Basantadas returns to the house of Mayabati. From his activities it becomes clear to Mayabati that he is associated with the rebellious monks. From Mitrananda, the Buddhist leader, messagers are coming to Basantadas to get green signal to invite the Jabans but Basantadas is yet thinking about it. He thinks, ‘The Jabans are outsiders – when they will come none of you or me will survive. They are conquering not the countries only but the religions also…. To protect one miscreant we should not fall prey to another miscreant.’. But Basantadas, a very noteworthy character of the novel, cannot sustain these honest views for long. One day Harisen’s attendants come to arrest Basantadas. His only thought then rebounds in him ‘You told it’s not wise to invite the Jabans – but what will you do now?’.
The novel Prodoshe Praakritajon has two parts. The first is named after the title of the book and the last is Dushkaler Dibanishi. When the first part concludes we see Shyamago returns to Ujbut, reunites with Mayabati and her family and Lilabati. At that time the whole village community were worried thinking about their future. Shymago also has talks about it with Lilaboti. One midnight that episode begins. The village is set on fire. The inhabitants of it rush to the nearly woods. Lilabati also leaves the village hurriedly with Shytamago.

Dushkaler Dibanishi is mostly overshadowed by the activities of the Budhist monks in the aftermath of the Muslim advent. Here the protagonists are Basantadas and Mitranand. The stories of Basantadas’ bygone years are also narrated in flashback here. The incident of his meeting a bearded Muslim trader gave a permanent impression in his mind. In his tour he was also harassed and manhandled by the feudal ruler and his people. In the meantime Basantadas overhears hugely about the Muslim people – their rituals and beliefs. He also participates in many debates where the Buddhist monks were also in different opinions about the advent of the Muslims. Through these the readers can hear different opinions regarding this from people of different walks of the society.
On other tour our other prominent character Shyamango and Lilabati are passing their days. They are not married but they are to behave as married couple to protect themselves. At last they reach the city of Pundra. Lilabati takes shelter in a Muslim centre. Then begins the new dilemma. To convert to Islam or not. Lilabati agrees to convert to Islam, but Shyamago disagrees.

News comes: The number of big boats bound for the south is increasing. Along with the royal people, their attendants and families are also leaving … the inhabitants of the western villages are leaving due to Muslim attack … The attackers did not demolish the village. They only went away with some young women and cattle. They did not kill anyone. But they profaned a temple. They killed and burnt and ate a cow in the premises of that temple and violated women.

In comparison to these infamous activities of the Turkish Muslim warriors, Shyamago and Lilabati experience new impression about this new doctrine and its preacher Ahmad, a saint. They have no particular idol to worship. They can say their prayer at any place if it is clear. Their prayer is called namaj. Shyamango hears that everyday some people are converting to this religion. These facts are not unknown to Lilabati. She knows, people of this new religion can separate if they are not happy in their marriage life Both the husband and wife can marry again they have no difference between the higher and the lower. They take food from the same pot. Everyday Haddy and Chandals are converting to this religion.

In this turmoil their own question to convert does not diminish. Shyamango tries to convince her not to give her own religion up. But Lilabati finds no other alternative before her. Her only demand, ‘I want the life wholly. I want family, I want husband. I want children – I want each of them, excepting none of them. And finally her demand sounds ‘I want husband, family, and children – these are my religion, I don’t know any other religion – you marry me publicly’. But what is the way out for Shyamango?
Then the final news comes. King Laksman Sen has escaped from his palace of Nadia. No one is there to protect. The soldiers staying there are helping the Muslim warriors. Afterwards they come to Pundra also. In the chaotic situation their arrival Shyamango is killed. And thus Prodoshe Praakritajon ends.

In the novel Shawkat Ali has sketched the landscape and its people very skillfully and sincerely. His characters appear as alive before us. They are not the historical characters, but they represent a historical time very properly even being imaginary.
To make a real milieu Shawkat Ali has created an unconventional language, which suits the characters and the context. In a meticulous selection of Tatsama (derived from Sanskrit) words the writer has built the milieu suitable for his plot.