When the homeland turns stranger? 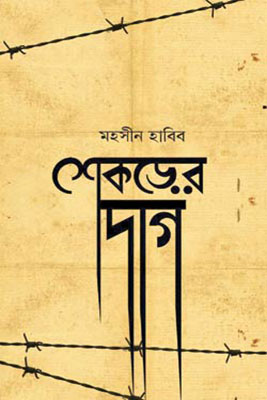 In Race Matters, Cornel West says, “Of course, the aim of a constitutional democracy is to safeguard the rights of the minority and avoid the tyranny of the majority.” However, I assume, throughout the world minorities hardly find the veracity of the statement in evidence. In particular, the Hindus of Bangladesh have invariably experienced the brutality of the majority over the decades. I have deeply perceived the helplessness of the Hindu minority of Bangladesh after I have come across the novel Shekorer Daag (Sign of Roots), penned by Mohsin Habib. A journalist and novelist, Habib has encapsulated the true picture of the jeopardized life Hindus live in Bangladesh through this novel.

The plot of the novel mainly revolves around the happenings soon after the 2001 general elections. It was a time when Bangladesh’s Hindus became victims of the brutalities carried out by fanatical followers of the BNP-Jamaat alliance. Mohsin Habib has particularly chosen Faridpur as the setting of the novel. The description symbolizes the helpless and insecure life of each and every Hindu right after the 2001 polls. The way Habib has structured the characters gives one the feeling that he somehow witnessed the unfolding tragedy from a close distance. The prologue of the book bears testimony to it.
The novel gives us a number of sub-stories centering on two major stories. Amid the two prime tales, one purveys the life and times of Hemen Ganguly while the other is about Akhil Poddhar and his family. Though the stories of Hemen Ganguly and Akhil Poddhar dominate the novel, the tales of other characters are also neatly woven into the narrative by the author. Habib can be considered a maximalist in characterisation. Time and space play an imperative role in the novel. Some characters suffer spatially. Hemen Ganguly belongs to this land; his forefathers were born and died in this land. When he is advised by Dulal to migrate to India, he finds no valid reason to do so. He strongly believes that migrating to India is very similar to living the life of an outsider in an unknown land. In this regard, I would like to recollect Mahatma Gandhi’s words, which come close to the thoughts of Hemen Ganguly:  “The only tyrant I accept in this world is the ‘still small voice’ within me. And even though I have to face the prospect of being a minority of one, I humbly believe I have the courage to be in such a hopeless minority.”

Akhil Poddhar also agrees with the idea of Hemen Ganguly. He with much confidence says that people of his motherland did not hurt him. So why will he leave his own country? He is determined not to forget his roots, no matter how adverse conditions are.

As a minority community in Bangladesh sharing a language and religion with the people of West Bengal, Hindus have been subjected to discriminatory practices or attacks by fanatical Muslim groups in Bangladesh. But people like Hemen Ganguly, Maqbul Hossain and Akhil Poddhar believe in the co-existence of Hindus and Muslims. Again, the novel shows there are some Muslims who wholeheartedly believe that Hindus have no right to live in Bangladesh. And whenever those Islamists or fundamentalists get a chance they try to regenerate their belief by unleashing various atrocities, such as raping and abducting Hindu girls, vandalizing the homes of Hindu families and grabbing their land. It is known to all that after 1947, a large number of Hindu families were forced to flee to India. During the independence war of Bangladesh, having been victimized by the Pakistani army, a large number of Hindus, finding no other way to survive in the then East Pakistan (now Bangladesh), took shelter in India. And they did not come back to their homeland after liberation.

The novel chronicles the insecurity of those Hindus who believed that in an independent country they would never face any kind of brutality by Islamists and fundamentalists. But the irony is that people like Akhil Poddhar and Hemen Ganguly, who once strongly opposed their co-religionists’ plan of migration, are compelled to change their mind after the elections of 2001. The climax of the story is to be noted. The day after the elections, Akhil Poddar’s wife, Alpana, and their only daughter Niyoti are abducted and subsequently raped by some followers of the BNP-Jamaat alliance. Later they are rescued in semi-naked conditions. This occurrence reminds Akhil and Hemen babu that this land is not theirs. Indeed, what happens to Alpana and Niyoti symbolizes the mental agony and helplessness of thousands of Hindu families countrywide. Habib’s novel reminds me of a novel by Humayun Azad entitled 10,000 and 1 More Rape, which deals with the kind of issues Habib deals with.

The author has narrated the novel in a very heart rending manner. Going through the novel, the readers will get a clear-cut, unbiased and neutral political perspective of the author. From beginning to end, Mohsin Habib’s social and political views are driven by logic rather than emotion. His diction is facile, which will invite readers to be part of his discourse. Broadly speaking, the way the incidents are ordered goes with the expectations of readers. Furthermore, the novel is prophetic in many ways. In Bangladesh, Hindus along with other minority communities still feel the same insecurity which they felt after the 2001 elections. It is assumed that Hindus in Bangladesh have tended to vote for and support parties such as the Awami League. They have therefore been the target of a political backlash by supporters of parties opposing the Awami League.

The novel brilliantly argues that Hindus have always been a target of numerous Muslim groups due to the antagonistic religious beliefs of both. There is no way to deny that no party stands beside the minorities; rather each and every party, in need, uses the minorities as a weapon. In truth, the novel attempts to unearth the truth that the religious antagonism between Hindus and Muslims has been always politicized.

People like Hemen Ganguly and Akhil Poddhar leave their motherland with a slice of hope. But while crossing the border Hemen Ganguly’s oscillation exposes that he is stepping into uncertainty. In a word, every minority feels that life is entangled in a bunch of uncertainties. In the light of the above discussion it can be said that Shekorer Daag will undoubtedly be food for thought for readers. The way Mohshin Habib weaves history, contemporary politics and emptiness in religion in a single knot reveals his potential as a novelist. You can ask me why Mohsin Habib is essential as a novelist. I would say he is necessary because he has the boldness to speak the truth. And he does not exaggerate the truth as.

Tusar Talukder is a critic. He teaches English at Central Women’s University, Dhaka and can be reached at tusar.talukder@gmail.com