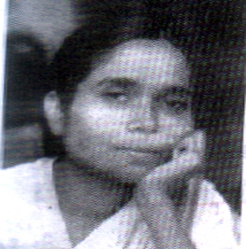 When I discovered Savitry Roy it was like finding hidden treasure. Most readers of Bangla language fiction will be unacquainted with the writer or her work. But, to me, she is one of the major authors to have written on the Tebhaga movement, the great historical and social event in the bygone chronicle of a Bengal that included both present-day Bangladesh and West Bengal.

I first came upon her writing quite a while back, in 1992, when I was on a visit to Shariatpur, a not very well-known district of the country. But I am sure people who are well-acquainted with Bangla literature would recall the honest literary activist Rathindrakanta Ghotokchowdhury in connection with Shariatpur i.e. Palong. While there, I decided to take a look at Ghotokchowdhury’s zamindarbari. While wandering around inside the homestead of this now deceased literary figure I found an elaborate almirah with a big collection of books. In there a series of books caught my eye, among which I saw that the writer’s name was Savitry Roy, who was unknown to me then. The books aroused curiosity in me – so many books written by her but I knew nothing about her!

Later on the following year, in 1993, I got hold of an issue of the West Bengal gentlemen’s literary magazine Choturango (8 December 1992), founded by Humayun Kabir and Ataur Rahman. Inside it was a review on Savitry Roy’s novel Swaralipi, a small piece, but enough to develop a further curiosity in me.

I started to browse through the Bangla Academy Choritavidhan, published in 1985, but was frustrated to find nothing there. Later on, searching through Sangsad Bangalii Choritabhidhan, (the first volume published in 1976, revised 3rd edition 1994) published from Kolkata, I found an entry on her. Afterwards, I hunted through the Public Library at Shahbagh but found nothing of value. As a Bangla Academy member I had access to their library and tried there also. Where, among a huge heap of books, was one of her books, but only the second volume of her epic novel Paka Dhaner Gaan.

The novel is simply written both in terms of narration and plot. But it deserved credit, I thought, for its content. The plot is set in Bangla social landscape of the 1940s, but what was of great interest was that such a novel had been produced by a woman writer. Women writing in our country, particularly in those bygone decades, are mostly about household affairs. The presence of revolution or social conflicts or acute observation of critical psychological phenomena were almost absent from their works. Today, Mahashweta Devi’s name will possibly top any list of women writers who tackle socio-political issues, but were there any predecessors of Mahashweta? With this question in mind, I began to search deeper to see if Savitry had been one.

I talked with M A Aziz Mia, a senior professor at Shariatpur College. A long-time cultural activist, I had known Aziz Bhai for a long time, though being much junior to him I would always keep my distance from this knowledgeable person. Even though he was a teacher of science his enthusiasm for literature is far greater than many literary people. I dared to write a letter to Aziz Bhai with some requests which would cost him time, money and patience, but in less than a month’s time a big package reached my hands through a courier service. With much astonishment I tore the wrapping and discovered xeroxed copies of Savitry Roy’s books, including Meghna-Padma (2nd volume), Malashri, Ghasful, Trisrota, and the great Swarolipi. I doubt if anything else then which could have made me happier!

By then I was trying to contact family members of Savitry Roy, but both Aziz Bhai and I could not trace anybody. We did get a name, Gargi Chakravarty, supposedly living in Delhi. With this little information, one day when I was going through Aziz Market book shops, I came across a book written by Professor Tanika Sarkar. In the author’s foreword she mentioned her gratitude to Gargi Chakravarty. I noted Professor Sarkar’s address, and wrote a letter to her asking if that Ms. Gargi was the daughter of Savitry Roy, and whether she could, in her infinite kindness, forward my letter to the former. After a month a letter came with the following words, “Let me first tell you that whenever I hear some researcher wants to work on my mother, my eyes become full of tears…” Though Ms Gargi wanted me to come to New Delhi to meet her, circumstances unfortunately never did work out in favour of a visit by me, and I could never talk to Savitry’s daughter face to face.

Whenever I come across a different work or author, I try to write about it. About Savitry, too, I wrote an article with the title ‘Bismritopray Ouponyasik Savitry Roy: Ekti Bhumika’ and Hasnat Bhai – Abul Hasnat, then the literary editor of Sangbad – published it in the paper in 2002. But I was still curious. I knew that there was another book called Paka Dhaner Gaan and I had to get hold of it. But how? At last I wrote a letter to my uncle-in-law Mr. Montu Das who lived in West Bengal but some 200 kilometers away from Kolkata. However, he did manage to send, at long last, a complete volume of Paka Dhaner Gaan. I was very grateful to him – the book’s price was 300 Rs, and the postal charge came to Rs 200! Soon afterwards my brother-in-law Professor Sanjoy Adhikary paid a visit to Kolkata and brought back xeroxed copies of the rest of her writings.

Savitry Roy was born at Wari in Dhaka in 1918 but she passed her childhood and adolescent days in Shariatpur, where her parents were permanently settled. In 1934 she appeared at the ‘Probeshika Exam’ (which later became SSC in Bangladesh and SF in India). After two years she did her Intermediate and got admitted into Bethune College (Kolkata’s first college for women) from where she graduated in 1938. She had grown up in a politically conscious milieu and married Shantimoy Roy, a friend of her elder brother Debiprosad Sen, in 1940. It is not known when she first began to be attracted to its cause, but it was in 1941, in the middle of the Second World War, that she became a member of the Communist Party of India. Qfter the birth of Gargi she had to decide to leave her job to take care of the newborn baby.

Savitry had developed a practice of writing poems from her girlhood days. Her first writing, a translated story, ‘Chokher Jol Felo na Meriana’ was published in 1944. Her debut novel Srijon came out in 1946. The second and third ones Trishorta and Swarolipi were published in 1950 and 1952 respectively. Her masterpiece Paka Dhaner Gaan saw the light of day in 1956-58. Another mega novel, Meghna-Padma, came out in 1964-65. The very important point to notice here is that the subject of almost all of Savitry’s novels is political Bengal. Ghasful and Bodwip were published in 1971 and 1972. She was directed to withdraw her novel Swarolipi by the Communist Party but she refused. Later, under continuing pressure from the CPI, having no other alternative, she gave up her membership rather than withdraw her book. Some references from that time show that due to this party decision Savitry Roy gradually went into oblivion.

Both Swarolipi and Paka Dhaner Gaan give a picture of the days before and after the Partition. And her specialty was her vivid and true descriptions that made her novels powerful. What she saw, she has narrated in an artistic way. The famine of 1939, Hindu-Muslim riots before the Partition of India, the Partition itself, the massive refugee exodus, etc., are the core elements of these great books. The simplicity of her stories and narrative style goes on to heighten the power of Savitry Roy as a fiction writer.

It is true that Savitry Roy did not stay a long time in the area which is now Bangladesh after the Partition of 1947, but almost all her writings center on the people, landscape and lifestyle of this part of Bengal. To know the recent past of Bangladesh, to visualise the most horrendous days of our history, to be able to see the outlines of the forthcoming truth reading the books and novels of Savitry Roy is a must.