A Sketch of Rahat Khan 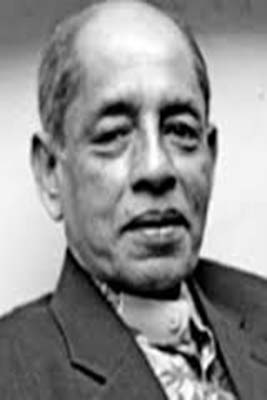 Rahat Khan, hailing from Kishoregonj, was born in the year 1940. Graduating from the Department of Bangla Language and Literature in 1961 under the University of Dhaka, he engaged himself in teaching in which he earned much fame and popularity. During his eight years of teaching he served in different renowned colleges like Nasirabad College of Mymensingh, Jagannath College of Dhaka, Commerce College of Chittagong etc. In the year 1969, he changed his profession and joined the esteemed daily Bangla language newspaper The Ittefaq in the post of Assistant Editor. And now Rahat Khan in known as one of the most eminent journalists of the country. But surpassing all those above identities he is a fiction writer.

In one of his memoirs Rahat Khan recalled his early boyhood days when he, a student of class three, dared to write his first story. In his interview with Suhita Sultana for The Daily Banglabazar Patrika (dated: 27 February 1997) he told: ‘Then we were living in a village. One day a kite pounced on a small tortoise before our eyes. The event shocked me very much and made me tearful. I don’t know why but I wrote a story on it and thus my authorial life began.’ Though his pen never stopped his emergence as a writer took some more time. In the year 1972 his first volume of stories Onischito Lokaloy (Uncertain Human Habitation) was published which was followed by Ontohin Jatra (The Eternal Journey 1975); Bhalo Monder Taka (Money for Good and Evil, 1981); Apel Songbad (News of the Apple, 1983) etc. During the first years of the eighties Rahat Khan’s debut novel Omol Dhobol Chakri (Milk white Service) came out. His other novels include Ek Priyodorshini (A Beautiful Women, 1983); Chhyadompoti ( A Shadow Couple, 1984); Hey Shunyote (O, Emptiness, 1984); Songorsho (Clash, 1984); Shahor (The City, 1984); Hey Ononter Pakhi (O, Bird of Infinity, 1989); Modhomater Khelowar (The Forward Footballer, 1991). Alongside them his other novels like Akangsha (Desire), Koyekjon (A Few Person), Ognidaho (Conflagration), Hey Maton Bongo (O, Mother Bangla) are well acquainted to the Bangladeshi readership.

The common life observed in Rahat Khan’s novels comes out of the urban Dhaka society. Mostly the middle class and higher middle class people take place in them. But as a journalist his experience abounded the higher-class society and even the lower poor class. We get the intermingle of them in his novels.

On the other hand as he passed his childhood and boyhood days in village home, we get the delineation of village picture in his novels. But it seem that novelist Rahat Khan feels much more easy in analysing and narrating the middle class mind. He can penetrate the earn the small feelings of them, their unexposed joy and sorrows, their sighs and boasts. If we look into the story line of the novel Omol Dhobol Chakri, we may find the justification of the above statement. Characters like Rafiq or Farhad or Mr. Ahahad’s wife are not very uncommon in our society, but the novelist presents them in such a way for which these characters and their surrounding appear before us as something novel and thus we discover uncommon personalities from these common people.

Rahat Khan gets delighted in portraying the boastfulness of the higher class society which is in reality a vague and vacant life. The features of urban society like its restlessness and frustration are commonly found in his novels. He can study the inner life of human beings and can draw them in a very meticulous way. The portrayal of sexual life that he makes of the urban people is very noteworthy.

The spirit of Ekushe February and Liberation war can also be felt in the works of Rahat Khan. He has composed a good number of songs where he took them as their themes. Alon with some of his stories the theme of liberation war can be found in his novels including Hey Matoh Bong, Hey Mohasunyota.