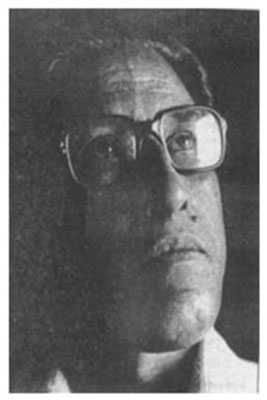 Abu Ishaque (1926-2003) is one of our notable Bangla litterateurs, whose name is categorized with those who wrote the least and showed the best. Three novels – one of which is a detective novel, two collections of short stories and the voluminous Samokalin Bangla Bhashar Obhidhan (first two parts of it have already been published from the Bangla Academy and the rest [how many?] are being prepared). As literature celebrates only quality, not quantity, he comes forth as a major novelist in contemporary literature with the publication of Surya-Dighal Bari (A Cursed House) written at the age of only twenty one and till now its mighty presence is felt by readers of Bangla fiction.

Abu Ishaque, born in the village Shirmangol of Naria in Shariatpur District on 1st November 1926, had his first story (1940) ‘Abhishap’ published in the Nabajug edited by the Rebel Poet Kazi Nazrul Islam. He passed his Matriculation with scholarship in 1942. His first big literary effort, Surja-Dighal Bari, which he finished writing in August 1948, had to wait about seven years for a publisher. Graduating from Karachi University in 1960, he served in many important posts in the country as well as in diplomatic positions in the high commission offices of Bangladesh. In the year 1984 he retired from the government service.

His first book of stories Harem came out in 1962. Next (1963) came the other collection of stories Mahapatango. The second novel Padmar Palidwip (Alluvial Island of the Padma) was published in 1986, 31 years after the publication of his first novel. The third and the last of his novels is Jaal (1989). In the introduction to the book the author has given the history of writing such a novel of light temperament, far away from his writing serious fiction. While he was trying to manage a publisher for his Surja-Dighal Bari in the early fifties, he says, he decided to write detective novels that could draw publishers very easily. Jaal was composed from Ishaque’s own experiences of his administrative life. True, the book addresses less serious readers but it is well written. In 1954 when he had finished the manuscript of Jaal, his Surja-Dighal Bari drew a publishing house and when the book attained many appraisals, Abu Ishaque hesitated to give the manuscript of Jaal a book shape and this hesitation endured till 1988.

What features of Surya-Dighal Bari established the book nationally and internationally? If we say, because it presents us with a character named Jaigoon, it will not be wrong. In the society of rural Bangladesh in the 40s where the whole social environment was in dark with illiteracy and dogmas, Jaigoon held up her head against all. Humanitarian demands compelled her to acquire those rebellious qualities, which make one ‘human’. Surya-Dighal Bari is set in such of time of Bangladesh or the then East Bengal where the famine of the decade as well as communal riots and separation had deeper impression on everybody. Abu Ishaque presents this theme in a very lucid every day language.

The main story of the novel dates around the years of World War II and independence from the British. Jaigoon, a divorcee of Karim Baksh, is the protagonist of the story. At about 30, she had a son, Hasu and a daughter, Maimun and nothing else except that house of bad omen. Generally it was believed that any house made across East-West demolishes all the people residing in it. During the famine that occurred, she finds it difficult to feed her children. And after a upheaval in her mind, she decides to go out of home for work, violating the restriction of purda. The author says, ‘Two young faces! They must survive.’ How can she stay home, where her little boy Hasu goes out to work as a porter near the streamer-station! And the sad picture is, even then they partially starve. Jaigoon sends the first eggs of her pet duck to the Imam of the nearby masjid but the Imam refuses to accept her offer. She bears these humiliations. But when the question of her daughter Maimun’s marriage advances, she sees no other alternative but to be submissive to the conditions imposed by the local elders. The condition reads that she will never go out for a job We can realise that the reason behind her submission to them is nothing but the welfare of her children.

The author of the novels has exposed the financial crisis as something stronger than spiritual crisis in our village context. Not only an individual but the whole society is the victim of it. The independence of 1947 was expected to bring a chance but everything remained the same. Every one was to surrender to it. But Jaigoon is such a character who never surrenders to any force for her own sake. She has to fast but her only anxiety is the fasting of her children. Even in such a situation when Karim Baksh requests her to come back, she only rejects him. And last of all, she denies her socio-religious promises also that she committed during the marriage of Maimun and walks out of her home, because there is nothing edible available for her children at home.

The episode of Kasu is another important one to illustrate the motherly aspects of Jaigoon. Karim Baksh, the former husband of Jaigoon, snatches the little kid Kasu from her and keeps Kasu with him. Karim Baksh tries his best that Kasu does not feel for his mother. But every plan goes to naught. Kasu gradually arranges some ghostly spectacles to put fear in him so that he would never ask about his mother. In such circumstances, Karim Baksh becomes compelled to call for Jaigoon. Jaigoon comes and does all the nursing necessary including the involvement of a genuine physician instead of some village quacks.

The story of the novel is set in a very superstitious Bangladesh village where no one can escape the spell of this vital misbelief. The belief in ghosts torments not only Jaigoon or Shafi’s mother, every people of the village is a believer of it. The oldies tell long stories about them; the mischievous people use them to oust Joigoon of her house. Syed Waliullah’s Lalshalu is a parallel to Surja-Dighal Bari on the theme of superstition in our life in this region. Jaigoon herself comes out of this trouble when Jobed Ali Fakir himself, who gave Jaigoon some safety measures to adopt to guard against evil powers, exposes his carnal desires. The other incident is about the brickbat by invisible creatures on Jaigoon’s house. It turns out that Gedu Pradhan, the village head and his gang, have been throwing stones.

The novelist has used dialect very frequently in the novel. The story, plot and the whole socio context have taken appropriate colours for this use of dialect. He has also manipulated legendary stories and traditional songs and poems that have helped him in his creation of the rural life. And thus Surya-Dighal Bari has become a literary success. Like Syed Waliullah’s Lalshalu, Shaukat Osman’s Janani, Shahidulla Kaisar’s Sangsaptak or Sareng Bou, Surya-Dighal Bari has also become a classic in the history of novels of Bangladesh. Joygoon of Surya-Dighal Bari has also been a symbol of revolt like Jamila of Lalshalu, Dariabibi of Janani or Nabitan of Sareng Bou. Some may try to find semblance between the characters like Shyama of Janani by Manik Bandopadhyaya, Sarbojaya of Pother Panchali by Bibhutibhushan Bandopadhyaya and Daria Bibi of Janani by Shaukat Osman. All of them took every responsibility of their family to protect their children in the hurdles of life. But in respect of Jaigoon, it may be mentioned that she is rather more than the rest because of their rebellious attitude against every sort of superstition of the Muslim society.

If we look into the socio-political context of the novel, we will get the contemporary picture when Abu Ishaque wrote it. Incorporation of the scenario after the Second World War, the historic famine of 1943, the black days of the Riots of 1946, the Partition of 1947 have made the novel more realistic and lively. How these incidents impressed the social village life is also under the consideration of the novelist. Abu Ishaque himself was a witness of all these for which he has been able to give the real colour to the stories. The unbearable situation of the famine and the consequences of it must touch any sensitive reader.

Though the total context and plot of Ishaque’s second novel Padmar Palidwip is a different one, here the indomitable human spirit is also present as a theme as experienced in the first novel. The vast canvas encompassing the whole populace of the story’s locality, their thoughts and feelings, love and hatred, their invincible zeal and their defeat, gives the book an epic disposition. Padmar Palidwip began to be written in 1960 and ended in 1985, as the novelist asserts.

Padmar Palidwip is about acquiring new char (the strip of sand bar that is constantly rising out of a riverbed). Ishaque builds the story on this acquisition of char through muscle power. He does not forget the personal lives involved. The conflicts devised from the acquisition of a Char play most vitally to form most of the characters of the novel. Along with the touch of agrarian village life, the special features of a Char life have added novelty to the whole milieu of the novel.

The location of the story of Padmar Palidwip is Khuner char (Murderer’s char), previously known as Lotabonia, and it got the new name when five persons were killed in trying to gain possession of this sand bar. Since then the char was in the possession of Erphan Matubbar, the father of Fazal. But in two months time an attack comes from Cherag Sarder. Rashid, the eldest son of Erphan Matubbar dies in this conflict. After facing legal procedures, Erphan remains as the owner. But the most hazardous attack comes from the river Padma itself: it grasps the char some three years after its emergence! After some seven years the char comes up again. Again the same occurrences take place. Erphan continues his occupancy.

As Ishaque did in his debut novel Surya-Dighal Bari, Padmar Palidwip is also a demonstration of the life of our huge poor people. War and its consequences have compelled them to turn into landless and last of all either they work for the biggies of the locality or leave it for searching a new livelihood. But along with all these stories, the conflict of the Matubbars pose as the central theme of the novel.

Fazal establishes himself as the main character while Jangurullah remains as the villain. The author traces how the poor famine-stricken people gather behind the two possible owners of the char only for a little food or money, when their lives are always at stake. The emotional relationship between Fazal and his divorced wife Jarina or Fazal’s present wife Rupjan draws our attention.

In the novel Abu Ishaque has juxtaposed the emotional life of the humans along with the acquisition of Chars. The company of Fazal gives Jorina a sort of comfort, but that cannot endure for some incidental reasons. On the other hand though Rupjan is to remain separated from her husband due to the misunderstanding of the in-laws, she gets her husband at the end of the novel.

Critics of Bangla novels opine that Padmar Palidwip does not take its readers to a final conscience and superhuman feeling which a great novel generally does. The prospect that Abu Ishaque created through his writing Surya-Dighal Bari does not supersede in Padmar Palidwip. And in this regard his debut novel is regarded as a masterpiece not only of the novelist himself but also in the history of novels in Bangladesh.