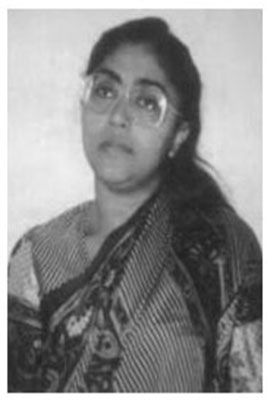 As the supremacy of men is observed more in every sphere of life, the domain of literature does not delineate any different picture. Resultantly when authors make any literary efforts, those are generally done from man’s point of view. When authors sketch their autobiographical experiences, they become nothing but the exposition of male people’s becoming. But what is about the becoming of our womenfolk? How do they meet their physical changes, how do they feel about the society’s look towards them, how do they grow up and crossing hurdles meet the needs of their thorny life? Akimun Rahman’s novels give us the answers in full detail, with much clarity and artistic flavour.

Akimun Rahman (b1959), now an assistant professor of a prestigious university, teaches Bangla literature, and prefers creative writing. She began her authorial life as a critic and essayist. Her voluminous book Bangla Upanyashe Bastabatar Swarup (Treatment of Realism in Bangla Novels) came out from the Bangla Academy in 1993. Later on her controversial book Bibi Theke Begum (From Bibi to Begum) got published in the year 1996. Purusher Prithibite Ek Meye (The Lone Lady in Men’s World, 1997) and Raktapunje Genthe Jawya Machhi (A Fly Drowned in Blood and Pus, 1999) are the two novels that Akimun has written by the year 2000. Along with all these she has written a volume of short stories Ei Shob Nivrita Kuhak (1999) and a juvenile book Sonar Kharkuto (1995).

Purusher Prithibite Ek Meye is a novel about a woman – a woman unmarried but at the age of marriage-hood. An NGO worker Shamima is the central character of the novel. Reaching the end of the book, the reader may term the lovelessness and pathos of Shamima as the protagonist of the novel. Shamima herself narrates her story the story of her physique and psyche. She relates it in full detail having no hypocrisy or retreat.
Shamima’s story begins with the incident of her menstruation (period). The terrific uneasy days draw our sympathetic attention to her. Women’s inborn untidiness takes a new and unknown appearance to us. Woman, who is always and everywhere regarded as a beauty, has to undergo such regular unpleasant period. Shamima, whose everyday companion is this sort of loathsome experience, falls in love with a dental-physician Monirul Islam. And the love-incident between Shamima and Monirul exhilarates the climactic situation of the novel Shamima gets pregnant, receives denial from Monirul, undergoes Menstrual Regulation (MR) and thus experiences the pangs of life.

This tiresome, loveless experience of Shamima actually dates far back, when she was a mere girl or rather we should say, when she was born. With the use of flash back, Akimun Rahman exposes the stories of the bygone days of Shamima. Neither her birth was greeted nor at her adolescence her physical development was accepted easily. All her liking and disliking were simply cracked down under the narrow and harsh attitude of the society. With the teasing of the mother: Devilish girl, your birth is the cause of all my sorrows’, with the ignoring treatment from the father: ‘Don’t create more problems for me’, she begins her journey of life. Shamima realises that she is unwanted, unlovable to all. Physical maturity springs more problems for her. Nantu shows inclination to her small breasts, the house tutor becomes interested to talk about the use of brassieres and Monirul Islam becomes eager to enjoy her physically, rather to give her spiritual attachment. Monirul avoids all the responsibilities of Shamima’s pregnancy, becomes rude to her but doesn’t stop to make sexual contacts. And afterwards…? The next happening is completely to Shamima, her own self.

From the mofussil working place Shamima comes to the capital city and contacts with a doctor and last of all experiences MR. We see what a terrible incident it becomes to her. The lengthy, painful physical happenings make everything of the world yellow and worthless. All touches of love and beauty vanish from her. Clinical affairs rapidly throw her to a fathom of darkness. Consequently her doctor reports that the whole part of the embryo is not ousted Shamima is to lie down on the operation table again. In her financial inability, her physical unfitness crooks everything. Dark hollowness only hovers all around.

In her second or till now last novel Akimun has advanced farther. Her narration and language take a stronger form in it. The plot of the novel and its diction also take powerful and colourful qualities respectively. In Raktapunje Genthe Jawya Machhi, we get Parveen as the protagonist. Parveen is at the age of forty now, a matriculate primary school teacher, yet unmarried and a sufferer of human-physical desires through her whole life.
Parveen is a daughter of a petty but devilish businessman and a village woman. She has a little education with a lunatic younger brother and a talkative and vulgar grandmother. Though Parveen is a girl of a poor and uneducated background, she does not lack the desire to have a normal marital life, a husband and much satisfaction with him. But reality of life never honours our hopes and desires it goes in its own way. Parveen’s dreams are also shattered by the storms of life.

How did Parveen begin? She began her girlhood days through taking care of her brother Shah Alam, who, very often, created many nasty incidents. Her father did not have enough money to maintain the family, nevertheless had women, though the family had an outwardly religious importance. In such an environment Parveen turns eleven. Both her brother and she suffered from skin diseases, which take an unprecedented description in Bangla literature. Parveen had Rabeya Bubu, a maid of the house and Jumma Kakka, a fellow brother of his father.

family on her future education. But the sorry saga is Parveen never cut the minimum figures in the examination. Moreover, she suffers from the complexity of being the eldest among the students in the class. Meanwhile she discovers the unusual hair in her armpit and abdomen. Hearing this her grandma orders to make them clear, though that cleaning is a mammoth task for Parveen, a novice in this arena. Her innocence in this spiteful chore present the readers a very obnoxious experience of life that they lad never gone through in black and white. The other complexities, which Parveen, feel deeply, are regarding her unequal breasts, hairs under nose, and longest middle toe. Thus she only considers herself as a vile woman of the society.

In the meantime Parveen, once, observes the bed scene of her parents. One day her father comes back home in the afternoon very unusually. Due to her mother’s illness Parveen is sent to her. The virile smell from him makes Parveen uneasy. An inexperienced desire begins to torment her. In other situation she also observes her mother’s pregnant condition and labour hours very closely. Moreover she has lesbian contact with Rahela Banu. In addition to that while one day she washes Shah Alam, he ejects out semen and this incident drowns Parveen in a more blackish hole. By now Jumma Kakka also begins to molest her very often.
All on a sudden there comes the opportunity to pass the barriers of matriculation examination. Jumma Kakka arranges everything – supplies books for home and copies in the exam-hall. Parveen overcomes the hurdle and latter on gets the job of a primary school teacher.

Jumma Kakka tells Parveen many sweet words but at last leaves for Saudi Arabia and with this Parveen’s first love-affair is nipped in the bud. Later on Sultan Ali appears and with no different behaviour he comes close to Parveen, tells her sweet words, gratifies his physical lust and marries another girl. And through all these Parveen remains as a fly drowned in blood and pus.

Akimun has created a very realistic atmosphere of the outskirts of Dhaka City where slang language and gestures are not unusual. With a touch of myth and superstition Akimun sets the past and present familial and social milieu of Perveen. If Perveen were a member of the so-called educated family and cultural society, possibly this demonstration would not have been so real.

From the above story-lines of the two novels certainly it becomes obvious to the readers how brave Akimun Rahman is! She doesn’t hesitate to tell us all that which others dare not to tell. All the untold tales of woman-life, their physical realities, their social backwardness and their personal lives have been exposed in a very practical point of view in Akimun’s novels.

Someone may raise the question whether if it is very essential to pick all these affairs in literature. They can only be answered that nothing in life is worthless to be a subject of literature if the presentation is artistic. Moreover everything that is in some way or other has some connection with life its sorrows and agonies, joys and smiles can be the part of literature. As literature is not devoid of real life, Akimun Rahman has appropriately chosen the subjects of her novels. How successfully and artistically anything in literature has been presented is actually the main concern. In that respect also the author of Purusher Prithibite Ek Meya and Rakta Punge Genthe Jawya Machhi should be acclaimed. In context of language and presentation, plot and imagination Akimun supersedes the normal practice. It is true that she was not yet able to formulate a radically individual language and technique of story telling in her first novel but in regard to her second one she has proved it wrong. And we must agree that her efforts demand our admiration from every respect.