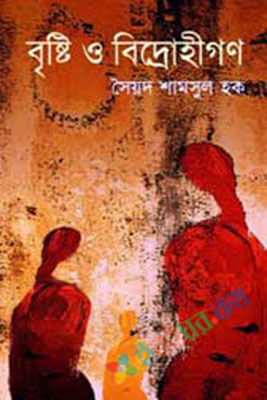 Syed Shamsul Huq (b 1935) is one of the most productive and active literary figures Bangla literature has ever seen. Excluding his huge volume of plays, poems, verse plays, stories, essays and other writings, the number of only his novels is about to touch 50 i.e. a half-century. But the fortunate thing is that this long-list does not categorize him in the popular fiction writers of the less-serious and trashy trend of the country. In all of his books, Syed Shamsul Huq is more or less an experimental one – regarding both content and form. His voluminous novel Bristi O Bidrohigon (Rain and the Rebels), published in 1998, is also a noteworthy attempt in the arena of novels of Bangladesh.

Before going to the deep of our evaluation it can he told for the information of the readers that Bristi O Bidrohigon began to get a form in January 1979. After being published serially in a national daily it came out in two volumes in 1989 and 1990. But the manifestation of the book did not satisfy the author. He rewrote and revised it and last of all brought it out in a single volume of about 500 pages in the year 1998.
In the novel the writer has placed before the readers three main things: A the time when the Muslim saints began to visit this region of the world to propagate Islam, as well as the time of the first half of the twentieth century when the Bangali Muslims were getting English education and coming out of religious orthodoxy; B everything of the far-past are retold from the legends and C the above two things are presented in the time and plot of our liberation war.

The novel opens with Mohiuddin, the leader of a group of freedom fighters of Jaleshwari of Rangpur, who is waiting for the rain. On the day the Pakistan army came to Jaleshwari, they took most people of the locality to a safe place and now they are staying at Bakchar that it will rain and they will connect all the watercourses surrounding the town. Resultantly Jaleshwari will turn into an island and Mahiuddin’s people will storm the Pakistan army residing at Jaleshwari. There at Bakchar Mohiuddin has Sultan, Sattar, Alam, Abinash, Haidar, Bashir, Ajmat and many others with him.

Thus Syed Shamsul Huq introduces us to the people of a small group and their society during the liberation war. But the writer, very aptly, inserts such information and events that his readers gradually discover themselves before the whole milieu of 1971. Narrating from the documents and newspapers, quoting from the electronic media the novelist does it. And for this technical use of the information of our national politics and international reactions to our liberation war, we get acquainted with the events of the liberation war. From Bangabandhu’s address on March 7 to the formation of government at Mujibnagar on April 17 – nothing escapes the sharp pen of Syed Shamsul Huq.

In the context of the story of Mohiuddin’s, there emerges the episode of Fulki, the beloved woman of Mohiuddin. Mohiuddin, a college teacher of Jaleshwari College, requested his uncle Syed Abdus Sultan and his daughter Fulki to leave the area but Syed Sultan, the Khadem (attendant) of the majar (shrine) of Shah Syed Kutubuddin, did not agree. His only words were ‘ It’s your madness, your beliefs have been polluted, everything is India’s propaganda, the military of the country cannot kill the common folk…. At Jaleshwari if the military opens fire, it will not open. Because it is the place of Kutub Shah, a very mysterious place’. And thus the intermingle of history through legends take place in the stories of our liberation war.

Mohiuddin invents a new idea that will, he believes, help them in their war. He spreads the rumour – he himself does it because as a descendent of Kutubuddin his words are more believable – that Kutub Shah had a huge amount of gold and other jewels which were buried with him. He thinks if this story gets exposed the Pakistani army will attempt to break through the majar and the people of the locality would be able to recognize their character that they are not the saviour of Islam, rather they are the destroyers of Islam and as a result people will attack them unitedly. To publicize his invented story Mohiuddin sends Bashir to Syed Sultan who denies instantly. Later on Bashir goes to Kana Tangra, a singer who resides near the majar. During the stay of Bashir at Jaleshwari we get a good many pictures that can illustrate the activities of the Pak army on the civilians.

There at Bakchar Akbar Hossain, a brave freedom fighter of the nearby area, comes to Mohiuddin to exchange his views with each other about Mohiuddin’s plan. In their discussion Akbar Hossain informs Mohiuddin that Mohiuddin’s another uncle Syed Abdus Sobhan, a veteran Awami Leage leader, thinks that Mohiuddin should stay at Kolkata instead of the war field. Thus Syed Huq exhibits the different views and counter views about the various aspects of our liberation war like the role of Mujib Bahini, Tajuddin’s role as the Premier, formation of government at Mujibangar etc.

There are more components of liberation war in the novel. In their very first days at Bakchar, a local farmer died accidentally at the blast of a mine. Momema, the daughter of the deceased farmer, came closer to Mohiuddin. During the talks between Mohiuddin and Akbar Hossain, Momena carries the news to them that the rajakars have locked Pishu Nana, a helping hand of the muktibahini (the freedom fighters). In that fight to annihilate the rajakars Momena dies. Till then every detail of the liberation war was quite satisfactory, but the last months sweep away very quickly and it does in such a way that readers fail to feel even the whole story line clearly.

The novelist is very prone to shift from the time past to a remote past, as to the time far future after the near future. And in this regard we must appreciate Syed Huq for his use of this machinery because we did not experience any such narration in Bangla novels before where the writer shifts from his fictional time of the past to future which is also a past in comparison to the present when the reader goes through the novel. Newer techniques of likewise novelty are a pleasure for Syed Huq. In Bristi O Bidrohigon along with the omniscient narrator some other characters such as Mohiuddin himself, Fulki, Mohiuddin’s father Syed Jalaluddin, Syed Abdus Sobhan, Syed Abdus Sultan play the role of the narrators. A good part of the total narration comes from the newspapers and documents and a diary also.

The diary of Syed Jalaluddin plays an important role to expose the nearly educated Muslim Bangali mind of the first decades of this century. Inspite of being a descendent of the priest family Jalaluddin turns to English education violating the century-old familial dogma. He comes out of all religious narrowness but at last becomes frustrated seeing the orthodox mentality of the people of his surrounding and at last leaves his home for ever. On his endless journey, he meets Mawlana Abdul Hamid Khan Bhasani who requests Jalaluddin to stay at Kolkata and work with Fazlul Huq. Through the life sketch of Syed Jalaluddin, the readers get the beliefs and disbeliefs of the educated Muslim people of Bangla of that era. His liberal religious ideology is an ideal one. Jalaluddin says, ‘ I am not an orthodox regarding religious affairs. Not even conversion to a different religion is something very novel to me – if Bangla to specify – no one can whole-heartedly say that they were of the same religion from the beginning of the universe; most of the Muslims of Bangla are converted from Hinduism. Such extreme talks about religion are very often seen in the book that exhibits the writer’s attitude. While talking about fanaticism he says referring Abul Mansur Ahmad ‘ If anyone could write any story like ‘Hujur Kebla’ about the activities of the peers and hujurs in this independent Bangla, his life would have been in danger …. If Abul Mansur Ahmad would survive in this tenure of Sheikh Hasina, the daughter of Bangabandhu, and would think to write such a story, the ink of his pen would dry away in fear of the terrorists of Jamaat- Shibir, or if he would write, any editor would fear to publish that and tell – oh, what a mischance, we are missing your write-up’.
Syed Huq tries to analyze religious beliefs from a liberal point of view and the fact is that he manipulates the whole plot of his novel on the bygone historical legends of seventeenth century when Syed Shah Kutubuddin came to Begal to preach Islam. The episode centering Kutubuddin and his activities, his son Jainul’s and others take a large share of the book. The legend goes that around the year 1601 when Emperor Akbar was on the throne of Delhi Kutubuddin was on a journey through Jaleshwari. Through different incidents he and his companions settled there and publicized Islam and thus the whole populace of the area was converted. As he was a religious figure, multifarious rumours about him and his activities were very usual. The novelist also does not turn from this standpoint. He presents different versions of those legends so that the reader himself can identify the reality behind them.
All these various episodes of the novel base on the familial story line of Mohiuddin-Fulki and others. The love-episode of Mohiuddin and Fulki is a trustworthy one. Fulki’s mother Hena was the beloved lady of Syed Abdus Sobahan. But knowing everything, Sobhan’s step-brother Syed Sultan married Hena, began to torture her immediately at the bridal night and all these gradually turned her lunatic.

If one raises the question that Bristi O Bidrohigon is not an elaborate depiction of our liberation war, we will fail to counter, but shouldn’t we appreciate the way the writer has depicted the legends of our past? Legend is, no doubt, an important component of our heritage and portrayal of legends of the spread of Islam is more sensitive and need more meticulous pen but Syed Huq has very credibly portrayed that past.
Before this one Syed Huq has attempted to write novels on liberation war previously. Nil Dangshon (The Blue bites, 1981) and Nishiddho Loban (The Prohibited Incense, 1990) are most worthy to mention in this regard. Since his first novel in 1959 he has been writing immensely and regularly. Poetic volumes like Baishakhe Rachita Pangtimala (Verses Written in Baishakh, 1970) Poraner Gahin Bhitar (In the Core of Heart, 1980) or verse plays like Payer Awaj Pawya Jai (We Can Hear the Footsteps, 1976), Nuruldiner Sarajibon (The Whole Life of Nuruldin, 1982) are a few to cite here that brought much pretige for him. His essays and short stories also brought his much honour. His most remarkable other novels are Ek Mohilar Chhobi (The Picture of a Woman, 1959), Khelaram Khele Ja (Keep It up Kilroy, 1973, revised in 1991), Duratwa (Distance, 1981) Stabdhatar Anubad (A Translation of Silence, 1987), Ek Juboker Chhayapath (The Galaxy of a Young Man, 1987), Naareera (Women, 1999) etc. Long live Syed Shamsul Huq. Let the number of his novels surpass the years of his age.