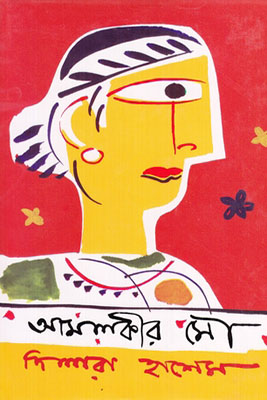 Dilara Hashem (b 1936) is one of the major woman fiction writers of Bangladesh. Since the mid sixties she has been producing regularly to enrich Bangla literature. Her debut novel Ghar Mon Janala (Houses, Hearts and Windows, 1965) brought her much acquaintance in the fiction reading public of the country. The other significant novels of Dilara Hashim are Ekoda Ebong Ananto (Once and Ever, 1975), Stabdhatar Kane Kane (Whisper to Silence, 1977), Kaktalio (Coincidence, 1985) etc. Most of the novels of her have a formidable size with stories of large canvass. Her Amlokir Mou (The Sweet from the Bitterest) is a very worthy production of her for many different aspects.

Amlokir Mou, published in 1978, is a story of Sara alias Sayera, a young woman with uncommon qualities. Better we should call it a novel of Sara’s psychological and familial milieu. The story is set in between the years of Sheikh Mujib regime and eventually that socio-political context has also delineation in the novel. Moreover, it is a milestone in the feministic literature of our country. Amlokir Mou is possibly the first courageous endeavour where the human identity of a woman has surpassed her womanhood.

The story opens in a time after the assassination of Sheikh Mujibur Rahman, the then president of Bangladesh, though a huge part of it is narrated in flashbacks which took place in Pakistan era or in post-liberation years. Written in omnipresent narratology, the story heralds Sara, the protagonist who is a British PhD holder and a teacher of psychology of Dhaka University, from the beginning to the end of the voluminous book. The tales of Sara’s father’s large family engulf a large part of the novel. Stories of Sara are most bosom and childhood friend Hasib, Sara’s new love sculptor Feroz and her divorced husband Mostak and their son Dara also take place alongside.

Sara is an emblem of liberty – liberty of women, which does not care for any special prejudice and bondage for women folk only. She smokes and takes liquor – practices that were inconceivable during the seventies even in the city scenario of Bangladesh. She has adopted these habits as her protest against the dominating male community, of which Mostak is a representative – whom she has even given up. Though Sara mixes with her friends at liberty she maintains her principle regarding sexual behaviour – she did not deviate from it even in her England days. She is controlled by rationality not by fashion of modernism.

Dilara Hashim has manifested an elongated and descriptive story to create Sara. She has started with the adolescent Sara, in 1960s, and tried to expose the specific mental bent of her. The person who mostly contributed to form this bent in Sara was her aunt Sajeda. Her father’s begetting so many children despite his impassionate attitude towards her mother posed as another reason for her such mental behaviour. All these surroundings gave her the courage to describe the cry for hunger of an insane girl in the bushy evening; or to tell Hasib that she can die for Hasib but can’t marry him; or to decide to marry Feroz even knowing about his forthcoming death. Moreover Sara is a good lover as well as a good mother.

The episode of Feroz plays a vital role in exposing Sara as a good lover. Feroz himself is also a worthy character who can deserve Sara’s love. From his boyhood he is a sculptor and the story of his personal life is also very eventful. Hailing from a village of Manikgonj, Feroz turned an atheist during the epidemic of pox when his two siblings died even after his night-and daylong prayer to Allah. In his adolescence he began to love pottery and make human images with clay. But his orthodox father did not tolerate this irreligious work of his son and one day discovering the idols he beat Feroz ferociously. Thus Feroz began a new journey of his life. He went to Pakistan, worked as a trafficker, attended an art college and later on returned to his village in 1971. But his mother made him swear to leave the country for which he eventually went to London. In London though Feroz found Sara two or three times but they become introduced and later befriended with Sara in Dhaka when she teaches at Dhaka University.

The other episode that has been dealt with much attention is of Hasib’s. Though Hasib loves Sara but we learn that Sara does not like to marry her beyond her friendly consideration. In between these incidents one day Hasib goes to his village home at Jessore with his father, where he meets his cousin Laiju, a mofussil college teacher. During their stay Laiju instigates an aggressive physical attachment with Hasib and thus he discards himself from the way of Sara. Later on, in the end, he marries another woman and leaves for Australia.
Though the main story line of Amlokir Mou centres round Sara, it abounds many other episodes. Stories of Kalam – Sara’s eldest uncle, Nafisa – Sara’s eldest sister, Motin – Sara’s eldest brother have contributed much to give completeness to the society, sketched in the novel. The short episode of Sara with Sheikh Mujibur Rahman is also very enchanting. When Sara had failed to manage a job even with her London PhD she met Bangabandhu Sheikh Mujib who she had been introduced during his return from Pakistani jail to Bangladesh at London. Her only fault for not being able to get a job was her attachment with the leftist friend Amol. Though later on she gets the job in the University, she has to go across many other hazards.

In understanding the family life of Bangladesh scenario, Amlokir Mou is a good read. Dilara Hashim has examined the whole society in her skillful, detailed and meticulous way. Her knowledge about the social changes and political advancement has helped her to give a true colour to the big canvass. Her portrayal of Sara is undoubtedly a hall mark in Bangladeshi literature. A character like Sara was not only uncommon in our literature but it was beyond our imagination also. Astonishingly Dilara Hashim has performed it in her own accustomed way. Sara is no alien to us – we must agree that she is a part of this soil and she is the representation of women’s liberation of Bangali society. In a well-fabricated story Sara is a marvellous character and thus Amlokir Mou has become a popular novel to be read and reread again and again.