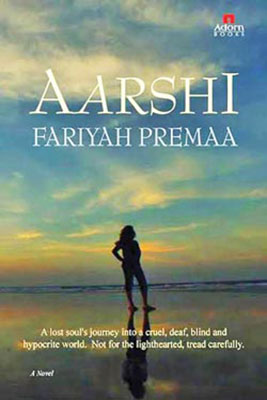 ‘Aarshi’ is a new novel set in Bangladeshi context but written in English. The theme of the story revolves around maltreatment of misfits and independent females in a traditional society. Aarshi is a girl who progresses through a variety of adversaries only to be rewarded with a violent loss of virginity. The adversaries include social prejudices targeted at women right after her passing of childhood, irrational dogmas that often torment potential minds and sexual harassments against women in a patriarchal society.

The story proceeds chronologically with the growth of Aarshi as a woman. Aarshi’s journey starts with her first sign of puberty at the age of nine and ends with her marriage night at the age of nineteen. Throughout this period she faces ignorance, mistreatment and unacceptable punishments both physically and mentally from people all around her including her own family.
The story is a typical look at a prodigy growing up in a traditional society. Aarshi is highly intellectual and a devout lover of arts and heritage. She herself starts writing poems from her 2nd grade. She is also very friendly, positive, daring, freedom loving and helpful. Her outlook about the narrowness of society, society’s repeated misinterpretation of a liberal spirit, regarding of women as products and holding them responsible for most bad things including her own rape, frankness of the males, shallowness of the girls, women receiving most harshness from women themselves, hypocritical class struggles are all familiar to a modern reader.

Aarshi grows up in a very rich family in Chittagong. She stays there until her secondary education. During this period we see her older brother  busy with friends, her father busy at office and her mother the only person residing at home  oppressing Aarshi the most, even after being a woman herself. She does not find any one to support her to combat the mental and physical dilemmas caused by puberty. One finds typical pictures of a young girl’s want for attention for her growing intellect as everyone keeps on treating her as a child. Nobody even seems to pay any heed to her basic emotions, for instance – love for an ailing father.
It gets far harsher as she becomes an occasional victim of sexual violence started by her first signs puberty at the mercy of men that range from her brother-in-law, driver, gym teacher to father’s close friend. Aarshi’s mother even punishes her physically instead of believing these stories and taking care of her.

The narrative is straightforward and simple but fluent and expressive. There is hardly any figure of speech or dramatic technique used. But the simple narrative fills the gap effectively as complex sentence structure and provocative diction are deliberately kept away. Another principal factor of the narrative technique is its bold straight-forwardness. Its presentation of exotic content is daunting more than enough for an Asian female writer. The authoress seems intent on delivering her message without much of any adulteration.

The tone and the mood are thoroughly full of grief, desperation and sometimes anger. The Protagonist is always feeling lonely though she consciously tries not to be an introvert. Her surrounding social hypocrisies, pretensions, status anxieties keep her free mind away from mingling with others. As a result she relies on her secret diary, imaginary black male friend, pet dog Wooly to give her company. No one seems to want to understand Aarshi which suffers her most when she gets a crush on her one true love. There are few instances of triumph when we see her humiliating an old womanizer and an arrogant youth in consecutive chapters. Her buzzing with addicted friends at university level also proves her proud waywardness. The short 2 to 3 paged chapters are aptly crafted to serve their particular purposes. Almost every page is filled with commotion and the reader rarely gets the chance to pause.

There is mild criticism against religious purists. However the author does not seem to attack ‘Islam’ in itself. We see Aarshi saying prayers five times a day till the end. At times Aarshi seems to prefer liberal wardrobe, smoking and debauchery, but only as reactions to socio-cultural paradoxes. The novel however advocates toleration of different ideas and personalities.

Aarshi’s experience of Dhaka University is also worthy of concern. Though it is a place destined for higher studies and liberalism, avoidance of differences compels many potential to seek refuge in addiction. Furthermore politics, crimes, common social misconceptions, class consciousness, inferiority complex, girls’ craze for guys’ attention all add to the curiosity involving the prevailing educational standards of public universities.

First published in the Daily Observer on 10 March 2015.