In Search of Sulekha Sanyal 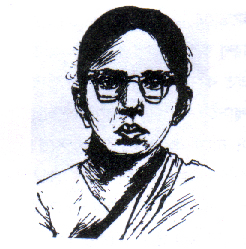 The name of Sulekha Sanyal is quite unknown to even readers of Bangla literature, let alone readers of English-language newspapers, or of South Asian Indo-Anglican fiction. But an English translation of one of her novels, Nabankur, was published as The Seedling’s Tale in 2001, with the translation done by Gouranga P Chattapadhayay. And both the book as well as the translation should be seen as a milestone in the history of feminist literature in Bangla language.

Sulekha lived for a short while, from 1928 to 1962 only. Excluding her major work Nabankur, she wrote a second novel titled Dewal-Padma along with some short stories. A third novel was published posthumously. But though her output is relatively small, I am sure any sensitive reader of Bangla fiction will recognize and accord to Sulekha a special place.

Had I ever read Sulekah’s books at an earlier age? I can’t recall but what I do remember clearly is that I first learnt about her from Torun Sanyal’s article ‘Uponyash Jekhane Jibon O Somoy’ (in the volume published in 2000 of Parikotha, a literary journal published from Kolkata), and that she hailed from Korokdi. That bit of information overwhelmed me since I too was born in a village very near Korokdi. The eight-page article gave rise within me to a sense of intense curiosity to know more about this female author. During my hunt for more information about her, I unexpectedly found Sulekha Sanyaler Golpo Songroho, the first book of hers I ever held in my hands, at Shahbagh’s Aziz Supermarket. How exciting were the plots of the stories! Most of these short stories are set around the time of the Second World War, the 1905 Partition of Bengal and the infamous Bengal famine. Almost all the stories are capable of drawing tears from the eyes of sensitive readers. A short note on the writer by her sister Sujata Sanyal (Chattopadhayay) opened up a different window on the writer for me. It informed that Oxford India Press’s Women Writing in India (Vol II), edited by Susie Tharu & K. Lalita, had included some chapters from Nabankur’s translated into English. In Women Writing Nabankur’s title in English has been rendered as The Germinating Seed, with parts of the novel translated by Madhuchanda Karlekar in 1993, which may have been specially commissioned for the book.

I managed to locate the postal address of Sujata Sanyal, and wrote a letter to her. Surprisingly, my letter elicited two replies one from Sujata Di, a traditional, Bangali-educated and poetry-loving lady, and the other from Abanti Kumar Sanyal, their eldest brother. Written on 15.02.02 from Kolkata the letter’s first line was “Ami Sulekha Sanyaler Borobhai”. It was a thrilling time for me not only to have accidentally come across such a writer, but also to be able to make contact with those who had been closest to her. Regarding Abanti Da I can only say that possibly he is the greatest Bangla-language scholar on Romain Rolland and French literature. His book Prosongo: Romain Rolland is considered a definitive work on the subject in Bangla. I feel very fortunate that he wrote me two letters where he also mentioned his abiding love for Bangladesh, his village Korokdi, as well as about recent developments in adjacent areas like Kamarkhali, etc. Both of his letters expressed an ardent desire for me to meet with him. On 4th March of this year, when I learnt from Sujata Di that Abanti Da had passed away on 20 December 2007 at the age of 84, I felt guilty at not having been able to meet this person who was not only Sulekha’s elder brother, but a towering intellect who had expressed such a wish to meet me.

My exchange of letters was mostly with Sujata Di. By then I had come across two more references to Sulekha Sanyal. One was in The Little Magazine published from New Delhi. In its 2001 September-October issue I found an article titled ‘The Sannyasin of Sundarpur’. The other was the inclusion of her short biography in Shotoborsher Kriti Bongonari (edited by Shyamoli Gupta, 2001, published from Kolkata). The finding and reading of these articles on her created further curiosity and awakening in me about a writer who was mostly unknown, and who had been born in a village nearby mine.

Later on, something else happened. A very close friend of mine, Probir Kumar Das, was to pay a visit to Kolkata. I had talked with him about my contacts with Sulekha’s family and that Abanti Da had talked not only with great feeling for Bangladesh, but had also wanted me to meet with him. Probir, with a smiling face, went and met Abanti Da at his Salt Lake house. In the course of that Kolkata visit, he managed to procure a Xerox copy of Nabankur and bring it to me in Dhaka, a book I had been unsuccessful in getting hold of here. I saw that on the very first page it was inscribed that the book had been written in 1954, i.e., when Sulekha was merely aged 26! It seemed amazing how courageous and outspoken a woman she had been, born and grown up in a remote village of Faridpur, who later became a communist and refused to bow down to the conventions and rules of the day! Somebody who went on to take part in so many social and political activities in the 1940s! Not for nothing did she name her book Nabankur, or new seedling, with Chobi the heroine personifying the new seed that would germinate radically different social plants and trees.

The trend of fictional creations based on autobiographical facts has a long history in English literature – some examples being Samuel Butler’s The Way of All Flesh (1902) or D. H. Lawrence’s Sons and Lovers (1913) or James Joyce’s A Portrait of an Artist as a Young Man (1916) in English literature. In Bangla similar treatments can be discerned in Bibhutibhushon Bandopadyay’s Pather Panchali (1929), or Aparajita (1931), all the way to Humayun Azad’s Shob Kichu Venge Pore (1995). But all such narratives are the works of men.

If we search for women’s work of a similar kind, it would be Nabankur, which would easily occupy a place at the top of the list – appearing long before Taslima Nasrin’s autobiographical Amar Meyebela or Akimun Rahman’s Rokto Punje Gethe Jaua Machhi (both published in 1999). No doubt, Padmarag by Begum Rokeya (1880-1932) or Janma Aparadhi by Sailabala Ghoshjaya (1894-1974) could be cited as earlier instances of feminist works Bangla literature, but Nobankur deserves its own place, a pioneering, major work based on the facts of Sulekha’s own life.

Sulekha Sanyal was born in a zamindar family of declining fortunes in Korokdi on 15 June 1928. The whole family was known for its involvement in the anti-British movement. She passed her childhood days and early adolescence at her Mashima’s in Chattogram. In 1942, when the city was bombed by the Japanese, she returned to her village and sat for her matriculation examination as a private candidate in 1944. Sulekha later was admitted to Rajendra College, Faridpur, and after passing her intermediate examination in 1946, went to Kolkata and enrolled herself in Victoria Institute there. In the year 1948, she got married – it seems not to have been a happy match and ended in a divorce in 1956.

After reading these books, I wanted to make Sulekha’s genius known to my fellow Bangalis and began to write about her. My article titled ‘Bismrito Naribadi Uponayas Nabankur’ was published in the literary page of The Sangbad on 15 June 2004, on what would have been Sulekha Sanyal’s 76th birthday had she lived. Later on, I enlarged it into a larger and more researched one and included it in my book Prosongo: Shiksha ebong Sahityo published in 2005.

To date I have not seen the English translation titled The Seedlings, and the parts of it that have been translated by and included in Women Writing in India simply arouses more curiosity on my part about it. And on the part of others. Very few people noted, in the bygone days, the writings of Sulekha Sanyal in the literary arena of Bangla language. But surely, in this present age, new historians of Bangla literature will not miss her, and her works and name will surely become more familiar to readers of Bangla fiction.