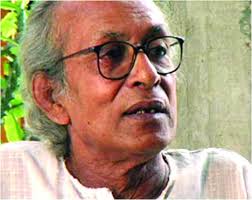 It is true that Mahmudul Haque (1940 – 2008) is not one of the popular novelists of Bangladesh though everyone would admit his permanent place as a sincere and artistic novel writer in the world of contemporary Bangla novel. General readers may not term him as a prolific author but a total of six is no negligible achievement. And in each of them Mahmudul Haque proved his genius – from presentation to language and diction to all the details of story telling, and characterization.

His first emergence as a creative short-story writer was acknowledged in the sixties, though his first novel came out in 1973. Since then after long gaps a total of six novels he has authored, among which the last Matir Jahaj (A Clay-made Ship) was published in the year 1996. From that point of view it may seem very usual that in twenty-three years six books credited to him is quite wholesome. But there is an untold story about his writing. If we serialize the years of his writings it will give us an interesting picture. The years are: 1967 for Anur Pathshala (Anu at his School), Nirapad Tandra (Undisturbed Sleep) of 1974 (published in the same year), Jiban Amar Bone (Life is My Sister) in 1976 (published in the same year), Kalo Baraf (The Black Snow) in 1977 (published in 1992), Matir Jahaj in 1977 (published in 1996) and Khelaghar (Playhouse) in 1978 (published in 1988). A close observation of the list exposes that after 1978 Mahmudul Haque actually wrote no novels at all and thus we can come to the conclusion that from 1967 to 1978 was the period in which he first appeared, got acclamation and gave up writing. Excluding his novels he wrote only one volume of short stories Protidin Ekti Rumal and a juvenile book Chikkore Kabuk.

The other feature of Mahmudul Haque’s novels is their thinness. Thin volume is never a negative characteristic as everyone knows the names of The Old Man and the Sea by Ernest Hemingway, The Outsider by Albert Camu, The Portrait of an Aritst as a Young Man by James Joyce etc. In book form Mahmudul Haque’s novels comprise 83 (Anur Pathsala), 133 (Nirapad Tandra), 177 (Jiban Amar Bone), 122 (Kalo Baraf), 64 (Matir Jahaj) and 72 (Khelaghar) pages.

The foremost aspect of all his novels is his sincerity to creation – he never tells a story for the sake of story telling, rather he always accommodates something behind the veil of the story. He is not accustomed to use the cliché language rather he always plays with the beauty of his language and thus creates a piece of artistic flavour. Mahmudul Haque always keeps himself aloof from the easy access which most of the writers chase to attain fame.
Anur Pathshala deals with a minor boy after whose name the title has been settled. Anu passes his days through many new experiences. The son of a mysterious couple, Anu at one time reaches the company of some urchins. All the behaviours and utterances of these kids convey unacquainted novelties of life to Anu. ‘Anu can not stay alone at home in the afternoon. He does not know what to do or where to go’. Possibly the readers of Bangla novel were never moved so inwardly by the feelings of a minor boy in an urban context. And for this reason Anur Pathsala becomes a worthy book for the older ones, not for the children. When Anu can see the gardener embracing his wife, he just dispassionately comments ‘her breasts are snow-white’. This innocent comment changes when the writer says ‘Anu can not bear his father. He considers him a devil. He hates him’ or when the teacher of his mother comes Anu feels ‘a sort of enmity with his mother’. Though this episode ends in a quarrel with Anu and Sarudasi, it accumulates a new parallel incident of that of Anu’s parents. Their irritable conduct produces such words that may be necessarily compared to the slinging match of Anu and Sarudasi. The last chapter of the book shows Anu searching eagerly for Sarudasi in her village.

In Anur Pathsala, like his other novels also, Mahmudul Haque delineates a story, though the thinner story-line does not take the upper-hand. In Nirapad Tandra we meet Hiran whose whole life is full of pangs and sufferings. A village girl Hiran sets out from her father’s house to respond the call of her fiancé but at last her mission ends unsuccessfully, she only changes the male laps and bleeds and bleeds like Anur Pathsala, here we also meet people from the down-trodden society but everything here appears in a new guise. From this point of view Jiban Amar Bone is a different effort. Set at the pre-liberation time the novel illustrates the inner and outer periphery of a young man Khoka. Khoka criticizes the enthusiastic behaviour of Bangali people, yet all his friends march forward for an unknown future. Other features of the then society do not go untouched. Activities of the hard-liners, upliftment of the Bangali bourgeoisie people take an appropriate explanation in the novel. Kalo Baraf tells of a two-fold story of Poka alias Professor Abdul Khalek of a mofussil college. In a first person narrative Poka tells about his child and boyhood happenings while in a third person narratology the author relates Khalek’s tale. In alternative chapters these two stories of the same man proceed and thus we get into the conjugal conflict of Khalek’s family having distant relationship with the nostalgic thoughts. Conversely Jainal is the protagonist of Matir Jahaj. The ignoble trade of Jainal is related with womenfolk. He goes to Betka in search of a fair village woman Kusum, where his assisting hand is Monohar Ali. They unitedly make numerous endeavours and last one is a fortunate trap with Kusum. The hateful story receives that excellence from Mahmudul Haque’s hand, which brushes the whole characterization and story with human love. Love of divinity is also a focal element of Khelaghar. In the very beginning chapter when Rehana comes to a close contact with Yakub and the reader meets them, none could guess the tragic mishap occurred previously. Rehana alias Zhumi alias Anna alias Gabbu alias Tenpi alias Lata stays and passes some days together with Yakub at skirt of the village and thus they make a bridge between them. But in the last but one chapter when Tunu returns from the burning Dhaka and reveals the revishment of Rehana by the Pakistani army, a tense milieu gets created. After Rehana’s departure with Tunu, Yakub’s desire to sleep by the footprints of Rehana in the verandah exposes a vacuum in his mind.

All these may arise a question of the lack of lofty ideas and thought in Mahmudul Haque’s novels. But we should not forget that a great novel is not always necessarily a book comprising elevated views, rather its presentation poses the best factor for making a novel great. The perfect assimilation of plot with the coinage of rural vocabulary and symbolization from nature Mahmudul Haque has substantiated each and every one of his six novels. Two decades have already passed after his last novel. Can’t we expect a more voluminous and more spacious novel with more lofty ideas from this apparently speechless author in future?