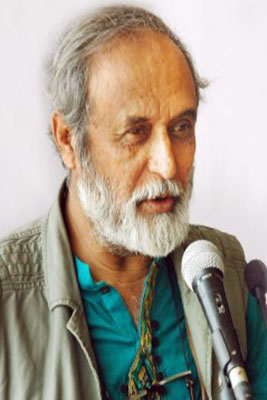 Mohammad Nurul Huda (b 1949) is one of the major poets of Bangladesh. And resultantly more than thirty-five volumes of poetry of him want to eliminate his poetic genius only. Excluding them he has edited a good number of books, and written some five volumes of essays. He is also a well-known translator of the country – in both Bangla to English and vice verse his pen wanders. He has written about five books in English language also. He is a researcher on folk literature as well as on Kazi Nazrul Islam. But today our attention is to his fiction only where he has roamed a life, which demonstrates a huge novelty before our readership.

Mohammad Nurul Huda has written only two novels: Janmajati (Birthrace, 1994) and Moinpahar (After the name of a hill, 1995) but astonishingly both these two reveal before us a life quite unknown to most of the inhabitants of Bangla-language region. The novelist depicts the nature and life of Cox’s Bazaar in them. Moinpahar and the Bay of Bengal are the two main characters (or ingredients) of the books. Nurul Huda has told his stories that are inseparably intermingled with those natural phenomena. Hills and the waters are artistically portrayed in Nurul Huda’s fiction. In this regard we must mention that the depiction of these natural components has not belittled his books as something regional, rather they have come out of the regional boundaries – as Thomas Hardy or William Faulkner’s most of the novels are not regional though they are set at Wassex and Mississippi.

It is undeniably true that Moinpahar is mostly centred round Kishore but what about Janmajati? Kishore of Mainpahar is also present in Janmajati though not as hugely as it was in Mainpahar. There are other important characters like Ramanidas in Janmajati and in both the novels the role of Sonabibi is very significant. But we cannot deny that the most noticeable characters in Huda’s novels are the hills, the rivers along with the Bay of Bengal i.e. the whole landscape of Cox’s Bazaar.

Janmajati open with Ramanidas, the peon of Lusai Primary School. His skin is as black as the Negro soldiers who fought in favour of the British in the Japan-British War during 1943-1944. In their first days they did not mix with the local people but gradually their hunger compelled them to do otherwise. Moreover, the hunger of the belly could be satiated somehow but what about the hunger of sex! The Negro soldiers wanted bodies to gratify their physical desires – thus the ‘Jhikjhik’ practice started. The ‘Jhikjhiks’ would run after the army lorries whenever they saw and Ramanidas himself was one of them. One day while doing so, he met an accident and thus received a permanent limp in his left leg but most horribly what happened is he became sexually disabled. From thence onward Ramanidas is the peon of the government primary school.

Who is or are observing all these past histories and present incidents? – They are Anu, the first person narrator, Surya i.e. Suruj Ali Shikder and Pakhi. They hear and see many things that are compiled in the book. But the question is about the existence of the novelist himself among the narrators. In this regard, we must say that in Moinpahar there is no such narrator; the omniscient writer himself narrates all the stories of the novel – through sometimes he does it in the second hand style.

In Janmajati, after the short episode of Ramanidas, there emerge other episodes of Khubsuratbibi, Amir Moulavi etc. After the closure of the school the three school fellows start for their home, northwards, and on their why they come across them. The story of Khubsurabibi is a very tragic one. Immediately after her marriage, the husband Sadakot wanted to visit Rangoon – as everyone of the locality would do to try his luck. Sadakot also went and never he came back. After Sadakot’s missing, every kith and kin of the old woman passed away one after another and now she stands alone in the life’s hell of agony. People talk differently about Sadakot’s missing – some say, he has gone across the ocean, some comment that he has been killed by the Japanese, some also say that he has married another woman in Rangoon – but Khulsuratbibi does not lose her hope. She protects the production of Sadakot – one, the daughter Gulbadan who died when cholera broke out in the village; and the other the orchard of Arhar pulse which the naughty school going children always try to damage.

Next comes the story of Amir Moulavi – one through whom comes both the story of Sonabibi also and later on we see that Sonabibi herself is a story-teller to the little kids. Sonabibi, the kids’ Sonafufu, once burnt the beard of a Kabuliala who went to the moulavi and told everything. It angered Amir Moulavi so much that he decided to oust the woman from the village by giving a Fotwa. On that very day the Moulavi was suffering from dysentery – he had to use the toilet very often and with her herbal medication Sonabibi cured the Moulavi immediately. The whole evening the woman remains outside the Moulavi’s house and at some time it became dusky. Moulavi gets moved and they two rush to a far away lonely place where they get entangled. Poet Nurul Huda has described this scene in a very poetic way. The whole incident takes a very symbolic and allegorical delineation from where the author reaches the philosophical climax – through physical copulation he sees the transplantation of the souls also.

Both Sonabibi and Kishore are enormously present both in Janmajati and Moinpahar unlike Ramanida whom we do not get in the second one. To any reader of these two novels, it may seem Janmajati is a context is which Kishore is set and in Moinpahar he is developed.
Three aspects of Kishore’s life are mainly illustrated in Janmajati. His love for the hills and the waters that is the landscape of Cox’s Bazaar is worthwhile to notice. He is in love with the nature that surrounds him. Moreover the century old stories and legends are also a great attraction for him. We hear those mostly from Sonabibi. In her story the story of the first men on earth i.e. the Lanka-men are narrated – where Yajuj and Majus’ story is intermingled. The other feature of the book is the folk songs by Barketa Gain. Scorers of Gain’s songs are found in the book as they are found in the everyday life of the people of Cox’s Bazaar. We do get the mystic songs of Lalon also. Thus the novelist shows us the formation of the characteristic of Kishore’s mind that is elaborately exhibited in the second novel. The night when missing his father Kishore returns from Badarkhali alone, he sees his mother Firuza in the arms of Monnu – a friend of Kishore – and he changes the direction and occupation of his life. The spectacle haunts him, but it also provokes him to have a glance. Thus the innocence of Kishore is shattered.

Kishore is present from the very beginning of Moinpahar. Here his sexual development is minutely portrayed. In Janmajati, he observes others’ relations but in Moinpahar he himself makes that relation. One day Thambhu came – Thambhu a girl of fourteen came with her grandmother to Chadaizzarghat to buy fishes. Thambhu’s physical stature drew Kishore’s attention. He got physically moved. Her breasts seemed to Kishore as the pair of hill-peaks. After the disappearance of Thambhu, Kishore enters into the awning where his assistant Chhalu was sleeping. Kishore lies on Chhalu and tries to reach the conclusion that a male body can also satisfy. It is undoubtedly brevity for Nurul Huda to show this sodomy in his fiction. In this regard it is worthy to mention that we get a picture of bestiality in Moinpahar also.

The culmination of his sexual exposition reaches its peach when he meets Sonabibi after being beaten by the two unknown cow-lifters. When he comes near her house she feels the existence of another man there. He keeps aloof and after some time Amir Moulavi comes out of Sonabibi’s hut. Sonabibi realizes that her relation with Amir is known to Kishore and so when Kishore comes, she makes a plot and thus make physical attachment with her.
At the end of the novel, we can realize that Sonabibi herself may have some relationship with the cow lifters. Moreover, it is also known that Firuza’s second husband Monnu also may have some involvement in the illegal trades. In search of the cow lifters Kishore once goes to the Arshibibi who can show the whereabouts of the missing property in the mirror. There Arshibibi tells Kishore a story. In Janmajati Sonabibi tells the story of the first man at the end of the book. Arshibibi’s story is about Moinkumari.

Thus we observe that in both the novels Nurul Huda creates a special milieu for which he has intermingled legendary stories of Cox’s Bazaar. Those stories are associated with the life style of the people of the locality. They upheld the heritage and history of Cox’s Bazaar. Probably the number of fiction in which that life has been pictured is not many. Nurul Huda has done this work with necessary care and expected skill and thus his novels pose as something worthy to mention in the horizon of the novels of Bangladesh.