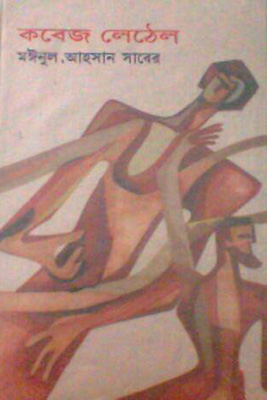 Moinul Ahsan Saber (b 1958) ranks among the popular trend of Bangladeshi novels. But he has authored some books that can be categorised as serious fiction. His pen has proved potential in both novels and short stories. As he has penetrated the socio-political issues of post-liberation war, he has analysed the inner psychology of human beings also. Liberation war and its aftermath are very common themes in his fiction. Kobej Lethel (Kobej, the Ruffian, 1992) is one such novel where Moinul Ahsan Saber has tremendously treated an evil character who, by virtue of the emergence of liberation turns into a true freedom fighter and later on again his spirit gets demolished when the post-liberation Bangladesh began to wheel out its social-political issues.

Kobej Lethel is a significant novel by Saber where he has illuminated the liberation spirit through an ordinary character – Kobej, who is a lathial i.e. muscleman by profession. Saber has shown how an illiterate village muscleman who turns gradually into a brave freedom fighter and how this person degrades to a damnable character after the liberation war and being trapped by the insane society cooperates the anti–liberation collaborators.
The story of the novel opens in June 1971 with the news of the arrival of the Pakistani military personnel. Though in the later part the earlier incidents are also presented in flashbacks where we observe the rising of Hares Master who later on becomes a commander of the locality in favour of liberation. In these flashbacks we experience the heroic activities of Hares. Hares did many things: he motivated students and common people to voice against the Pakistan regime and organised meetings and processions by them. Finally ignoring all protests from the few pro-Pakistan people on 23 March of the liberation year he hoisted the new flag of the emerging nation Bangladesh.

The news concerning the arrival of Pakistan Military personnel creates a tumult among the society. All the village folk gather around two people – one is Akmol Prodhan and the other is Romjan Sheikh. These two people are rivals to each other but they belong to the same group – they both help the military people to operate their activities against liberation spirit.
But what is the role of Kobej? Kobej is a criminal and commits all his evil activities under the direction of Akmol Prodhan. Kobej has been jailed several times and for the last time he came out of the jail during the liberation fight when the administrative strata broke down.
During this tumultuous period Akmol Prodhan plans to eliminate his enemy Romjan Sheikh for which he tries to encourage Kobej. In various ways he endearours to convince Kobej in performing the action but the later does not agree without any protest. Thus the good spirit of Kobej begins to come up. When the military personnel come to the village and begin their heinous activities Kobej is seen very pondering. The army people kill many villagers as they appear before them as untrue Muslim, though they themselves do not know the Suras of the holy book and they only know, as the officer asserts: ‘I know how to shoot. I know how to kill those who are against us.’

The question of true and untrue Muslim haunts Kobej very deeply. The military men identify, with the help of Akmol Prodhan and Romjan Sheikh, the persons who are in this way or that uphold the spirit of liberation war. These heinous military men shoot the elderly mother of Hares Master, and take away Hares’ sister, a little girl of merely thirteen. On that day a feast is arranged at Romjan Sheikh’s where the heads of the village along with Akmol Prodhan are also invited. In the feast the Pakistani military officer gets Hares’ sister Haoya married with a Muazzin of the village, as the rumour goes she was to be married with that Muazzin. After the marriage ritual the sepoys shoot the bridegroom and the bride is ordered to pass the night with the officer. The next morning the bloody dead body of Haoya is discovered. All these incidents arouse the true senses in Kobej.

Afterwards some more incidents happen. One day the Mukties i.e. the freedom fighters attack and kill two Pakistani soldiers who were roaming away from their camp. Resultantly the rest soldiers get furious and accelerate their action. By their severe action they catch hold of two tender-aged boys who are involved in anti–Pakistan movement. Romjan Sheikh plays vitally in imposing punishment on and killing of those two boys for which Kobej reaches his climactic decision to kill Romjan. The first part, which is the largest one, of the novel ends when Kobej replies to Akmol Prodhan’s offer of giving money or land or anything he can demand, ‘what shall you give me Prodhan? I haven’t killed Romjan for money.’
The middle part of the novel runs only for about eighteen pages. In this part we can know that after killing Romjan, Kobej went across the Bangladesh border where he happened to meet Hares. Afterwards he proved himself as a faithful freedom fighter and last of all after the 16th December they all come back to the free land.

In this part the readers begin to get the inconceivable scene that the people of Bangladesh had to undergo. Those who did not participate actively in the freedom fight gradually grasp all the instruments of the administration. The true freedom fighters surrender their arms and ammunition but the untrue ones do not. Consequently the untrue people begin to practise everything like grabbing others’ property, belittling real freedom fighters and many other things whatever they liked.

In the situation Kobej tries to encourage Hares to speak violently against all these, but sorrowfully Hares fails as he does not posses any power. But Kobej himself can not remain silent. The newly emerged evil people trap plans to take revenge against Kobej. As a result a case is filed and Kobej receives sentence for fourteen years in the murder case of Romjan.
The last part of the novel has been subtitled as ‘Bortoman Porbo’ i.e., the present phase. This part deals with the black days of Akmol Prodhan as well as the revival of him. Prodhan manages to meet the leaders of the ruling party at the cost of a big amount of money and gradually begins to tackle everything about him. He returns back to his village, manages everything to bring out Kobej from the jail and establishes Kobej as a great freedom fighter and he also publicizes that he was the person to send Kobej to the fight in 1971. Eventually 1974 comes and during the famine-stricken day Akmol Prodhan speaks out ‘Pakistan days were better than now.’

Kobej Lethel ends with the scene of a village court where the accused is Hares Master and on the seat of the judge Akmol Prodhan is seen. This time Kobej denounces all his good spirits. In an argument when Hares Master blames Kobej for announcing Akmol Prodhan as a freedom fighter and reproaches him, Kobej jumps over Harej furiously and reaffirms that Akmol Prodhan was the person who sent him to the fight.

We must agree that Moinul Hasan Saber has sketched the up and fail of Kobej’s spirit in a very meticulous way. He has not tried to present Kobej as a good soul anywhere, rather he has delineated the transformation of his soul and shown how the surrounding social environment changes one’s inner mind. Kobej Lethel is not only the change of Kobej, the person, but it is, in fact, a meticulous document of the change of our society after the liberation.