Rabeya Khatun: A Prolific Writer of the Middle Class Mind 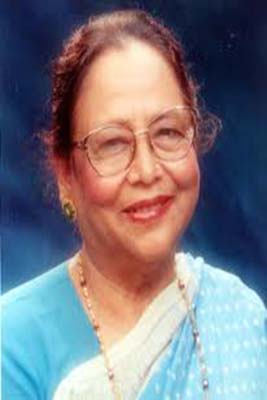 Rabeya Khatun (b.1935) is one of the most prolific writers of Bangladesh. During the fifties of the twentieth century she started her authorial life with a short story “Proshno”. Later on in the year 1963, her debut novel Modhumoti was published which brought her satisfactory acquaintance to the Bangali readership. In the same decade a good number of her novels came out that established her not only as a representative of the women writing community but as a major fiction writer of the country. Her other novels include: Mon Ek Shwet Kopoti (Mind is a White Pigeon,1965), Ononto Onnesha (Endless Pursuite,1967), Rajabagh(1967), Shaheb Bazaar (1967), Ferari Surjo (Fugitive Sun,1975); Onek Joner Ekjon (One of Many Persons,1976); Jiboner Ar Ek Naam Dibos Rojony (Another Name of Life is Day and Night,1980), Bayanno Golir Ek Goli (One of Fifty Two Alleys,1984); Baganer Naam Malnichora (Name of the Garden is Malnichora,1995); Ei Birohokal (Time of Seperation,1995) Ei Bhora Bhador Mah Bhador (This Rainy Days of the Month of Bhadro,2nd Ed.1995), Priyo Gilshana (Beloved Gulshana,1997) etc.

The debut novel of Rabeya Khatun deals with the problems of the weavers on the bank of the river Modhumoti after the partition of India. A true picture of that society: their beliefs and prejudices; poverty and financial constraints; hopeful and rebellious bent of mind have been portrayed from a very practically experienced view. The economic, cultural and educational sketches of that locality make a whole picture. As a start it proved successful for the novelist, though the plot of the novel was not that much well knit and some may try to find fault in respect of characterization.

Her other novel Onote Oneshwa presents the middle class Dhaka society, though the writer has come across the limitations of that society which may seen impractical to many Bangladesh readers. The uprising middle class rushing towards pomposity and extravagance has been focussed very meticulously. The licentious love between the young protagonist Wahid and his beloved, a married woman of some ten years senor and having a child, appear as unnatural in the milieu of Bangali culture.

Her another novel Rajabagh delineates the urbanisation and expansion of rural area to an urban one from where it flourishes to a megacity. Rabeya Khatun has woven her story with historical components. She has gone far back to the time when a son-in-law of the Bhowal Estate got some land as dowry where the poor service holders began to inhabit; and thus gradually penetrates the urban elements.

As a consequence the river bank people began to retreat and make a permanent locality of their own where the Hindus were the majority. Their enlightened part participates in cultural activities also. United they also set up a school there; even a night school for the elderly illiterates. In the meantime the tumultuous time of the Bangali nation rushed on: the second world war, Independence of India, famine, partition of Bengal, migration of huge number of people caused a drastic change in the life style of Rajabagh. The Hindu inhabitants began to migrate whereas there arrived the Muslim migrants from India; and thus it began to form a new society. The woman folk began to receive education and get jobs. The newly educated walk of life brought a change to the century-old life style. Though well-off people could keep pace with all these changes very easily, it created a great havoc for the lower class society. As a whole, Rajabagh takes a panoramic context in a chronological perspective where we meet the year of 1952 also.
The black night of 25 March of the year 1971 is the focal point of Rabeya Khatun’s tour de force Ferari Surya. During the decade of Ayub regime (1958-1968), in the social, political, economic and cultural arena there arose a huge tumult across the whole nation. The novelist has transformed the rebellion against the Pakistan domination through the characters of Abed, Ashek, Iqbal, Abdullah, Ramjan who later on participate in the Independence war in 1971.
Rabeya Khatun is one of the few writers of Bangladesh who have been honoured with the highest national award Ekushe Podok. She is restless; no sort of laziness can hover over her. Due to her relentless work the number of her books is about to meet a century.