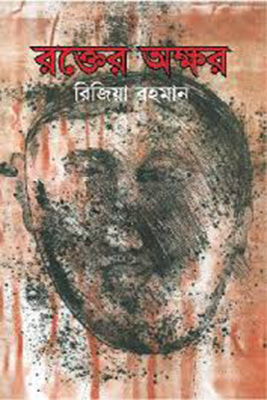 Rizia Rahman (b 1939) is one of the most significant writers of Bangladesh who have enriched our fiction with their worthwhile endeavour. Rokter Okshor (Blood Words, 1978) and Bong Theke Bangla (Bangla is from Bong, 1987) are her two major novels that have placed her permanently in the history of Bangla fiction. In the epic novel Bong Theke Bangla she has encompassed the long history of our nation and culture and language. The other novels that have brought Rizia Rahman name and fame are Uttar Purush (The Successors, 1977), Alikhito Upakhyan (An Unwritten Story,1980), Shilai Shilai Aagun (Stones in Fire, 1980), Ghar Bhanga Ghar (A House-Breaking House, 1984), Ekal Chirokal (Now and Eternity, 1984), Prem Aamar Prem (My Love, 1985), Jharer Mukhomukhi (Against Storm, 1986) etc.

The publication of Rokter Okshor is a great event in the history of creative writing in Bangladesh – before it possibly we did not get any other novel which is completely about a brothel. Moreover, the writer’s treatment of the theme is both analytical and humanistic. In the thin volume of only one hundred and ten pages the novelist has painted the canvass where some prostitutes have got an individual treatment and in a whole they have created a socio-political situation of the contemporary Bangali society. Moreover links of Yeasmin, a member of the prostitution, with our great liberation add special colour to the whole setting of the novel.

Rokter Okshor opens with a very poor, shabby and needy scenario of a prostitution of Bangladesh – it is generally known as Golapipara in the city. A morning in such a house takes a true picture at the beginning where the characters are Kusum, Bokul, Jahanara, Sokhina, Morjina, Rupa etc. – all of them are sex workers from a very tender age to the full grown. But such a brothel always abound more people as we have got here persons like Shanti, Jorina, Piru, Parul, Huri, Mamota etc. The novelist has very meticulously inserted the background stories of most of them before their coming to this profession. But subsiding all of them the person whose story touches most is Yeasmin – an educated girl of delicate nature who had been violated by the Pakistan army during the liberation war and later on refused by all her near relatives. She is a ‘Birangona’ – the official title for the violated women rendered by the government. There are more people: Golapjanburi who was once a beauty and later on owner of a brothel house and now waiting to meet death in the severe pangs of life; Kalu who is a owner of some of the girls whom he bought from different women traffickers; insane Rohimon previously a sex worker who is now a skinny human skeleton with no nose and has a hole beside her mouth caused by venereal disease; Mashi (the bawd) who was compelled to accept this profession even being born of a higher Hindu caste family; Kazi Saab, the owner of the building who outwardly behaves fatherly with the rented dwellers, but turns a butcher whenever any of the them fails to pay the rent in due time; Fulmoti whose fate has worsened because of her giving birth an unwanted child; Hiru another owner of some girls who always tries to establish his authority over others with might. Alongside all of them, Delwar is present who is a journalist–writer and who inspires Yeasmin to revolt against all sorts of unjustness.

Every human being is the protagonist of his/her own story and each people of Golapipara springs of a mightier story – because to be a sex worker is not an eventual end of a human. In this regard we must agree that Rizia Rahman has been able to give language to the sorrowful events that compelled them to meet this inhuman life. The author does not take the help of different plots but rather she overlaps all the episodes and creates a complete one where Yeasmin’s story stands as a stem. In small lines she has given sketches to these poor creatures.

The tidbits of these small but vital characters portray our society. Piru – less than fourteen; after the devastating flood their whole family shifted to Dhaka city; father became the cart driver and mother maid servant; one day she along with her little brother was picked and the last destination is where she is now. Parul – about fourteen; during the great famine (i.e. of 1974) her father died; the needy stepsister sold her to the traffickers. Morjina: came to the city to look for a job, got a job of a maid servant and last of all survive herself entering this hellish house. Shanti: was previously married to a married man; later on left her husband’s house for the inhuman torture boy her fellow wife and returned to her brother’s home; but the sister-in-law denied to accommodate her and she took shelter in the nearby brother and last of all in Dhaka city. Bokul : during the famine of 1974 their whole family came to the city; their abode was the streets; one day some hooligan picked them up before the police and Golapipatti, became their destination. All of these characters are the victims of poverty. But there is exception also like Mamota. From her girlhood, she nourished some evil elements in her – she would smoke; fall and make love with different people and at last eloped with a young man who gave her word to make a heroine of the celluloid but her fate brought her in this devilish place.

But above all of them the story of Yeasmin stands up. In the whole whorehouse she is considered exceptional and respected by many though not by all. The appearance of Delwar, the journalist–writer helps us to enter into her story. Yeasmin’s brother was assassined on 25 March of 1971 by the Pakistan army personnel. In no time his friend Kamal joined the Mukti Bahini. Returning from the training Kamal came back to Dhaka for an operation and took shelter with his arms and ammunition. But due to the malice of their servant, the information reached the Pakistani army. They gheraod their house – Kamal could escape but the army personnel shot all members of the family and took Yeasmin. When the nation got liberation she was also freed. She along with all the ravished women was endowed with the title ‘Birangona’ and was sheltered in the rescue house. Later on when she tried to meet her relatives, she received insulting surprise from everyone. In every step they began to be doubted and laughed at. As a go of the day a young boy came forward to marry her – but it was only a trap to grasp the paternal property of Yeasmin. The brutal husband even had a wife and began to bring other people for enjoyment. One day she came out of that house thinking: ‘If I’m a harlot for the war, I won’t let the biggies to enjoy me. I am a prostitute. I will work as a prostitute’ – thenceforth she is a resident of this red light area.

Rizia Rahman has presented all these stories in describing the every day stories of the bordello. She takes account of it and its persons round the clock and creates a real picture – language, manners and every other things of the people of this bawdy house are absolutely life-like for which Rizia Rahman deserves much acclimation. She has drawn the picture of a prostitute but in reality she has drawn the picture of the components outside the prostitute that make people to accept this occupation. Her true pen has unmasked the political leaders and social elite with her sharp pen. In this regard she has done much well than any male writer – none of whom has ever dared to write any book which might have served this purpose.

Even after twenty years of its publication if any reader takes the book in his/her hand, s/he will not lose the interest in it – rather she/he will be able to measure the mighty pen of the writer.