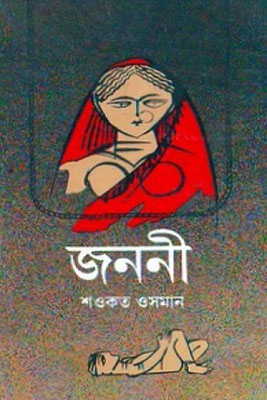 After the partition of India-Pakistan, Bangla began to be exposed as an independent field in East Bengal (the then East Pakistan) and with this view the literature here tried to stand up independently from that of West Bengal. Syed Waliullah’s (1922-1971) Lalshalu (1948) is the first effort of this trend, which has to date proved its success as an embodiment of humanism in our socio-religious melieu. Shamsuddin Abul Kalam’s (1926-1997) Kashbaner Konya (1954), Abu Ishaque’s (b 1926) Surya-Dighal Bari (1955) are the successors in which list Shaukat Osman’s (1917-1998) Janani is as worthwhile instance. It is one of the most significant novels with which modern novels in Bangladesh set up its journey.
Janani (The Mother) is the first novel of Shaukat Osman, which came into book form in 1958, for the first time. In the Foreword of the book Osman informs that he started to write the book in 1940 and finished it right after the partition in 1947. The novel began to be published serially in Saogat in 1944-45. But the sorry saga is it could not see a book form in next ten years.

The dilemma, yet to be solved, is which book did Osman write first – Janani or Boni Adam? The later one was first published in the Eid issue of Azad. Later on, its copy got lost and after a long gap it was discovered from the Bangla Academy in January-February 1989. In 1990, it got published as a complete novel in an Eid issue of Bichitra. From all details, critics believe that Janani is the first one that Shaukat Osman started to write. And we observe that in his first enterprise Osman forwarded a very weighty foot that imprinted a permanent place for him in Bangla novels.

Shaukat Osman worked as one of the most prolific writers of Bangladesh. Since the liberation of Bangladesh he was as if the conscience of the whole nation. Excluding his thirteen novels he wrote a huge number of other books. He composed plays, translated foreign literature and wrote memoirs. His juvenile works are also very noteworthy. In the field of essay and light prose works he is an exemplary figure in his contemporaneous literary society.

Shaukat Osman began his novelistic career with writing about the agrarian village life – its people and society. But he did not remain in that trend for long. Necessity of the nation compelled him to invent newer trends. Protesting the Pakistani Military regime he wrote an allegorical novel called Kritodasher Hashi (The Laughter of a Slave, 1962) which was marked as an initial literary slap on the autocratic regime. Another important feature of the book is that a great part of it is written in dialogue, though above all it is considered a novel. His next novel Somagom (Encounter, 1967) is also an experimental one where the author has placed humanity above everything in the form of a fantasy. Osman has selected themes of difference for the following novel Chourasandhi (Friendship with Thieves, 1968). Through this novel, he has created an opportunity for his readers to peep into the life of higher class people. Raja Upakhyan (Stories of Kings, 1970) is another example of Shaukat Osman’s writing of people’s story in allegory.

In the novels of Bangladesh, liberation war is a significant incident, as it is important for the whole nation. Shaukat Osman is one of the pioneers who took the freedom fight as their topic. He has authored five novels about this war. Artanad (Scream) can be taken as a precursor of Osman’s novels on liberation war. This novel portrays the pre-liberation political condition of East Pakistan i.e. Bangladesh. His other novels on liberation war themes are: Jahannam Hoite Bidai (Farewell to Hell, 1971), Dui Sainik (Two Soldiers, 1973), Nekre Aronyo (Wolves’ Forest, 1973) and Jolangi (The River, 1986). Osman has always roamed different themes and changed techniques in his novels. His other experimental novels are: Patongo Pinjar (Insects’ Cage, 1983), Rajshakkhi (Approver, 1985), Pitripurusher Paap (Sin Committed by Forefathers, 1986), Puratan Khanjar (The Old Dagger, 1987) and Raj Purush (The Royal Man, 1992). English versions that have been made of Shaukat Osman’s novels include Janani, State Witness (Rajshakshi), Laughter of Slave (Kritadasher Hasi), Bankajol (Jolangi) The King and the Serpents (Raja Upakhyan) etc.

Janani is a true picture of a village Muslim family. Before Shaukat Osman’s attempt this true picturization was not an available topic. Janani is the first attempt where we get a true and humanistic delineation of Muslim community and their views and attitudes. Moreover, it portrays the individual self also.

Dariabibi is the protagonist of the novel. Along with her Ajhar Khan, her husband, also plays a vital role. They two make a family where Amjad, Naima and Shami are their offspring. Shami comes in the world much after the story has begun. Ajhar is Dariabibi’s second husband as she left her previous one’s house some days after the death of her first husband. There she had also a son whom she could not bring with her because of the brutal behaviour of the other members. Dariabibi’s that son’s name is Mona.
Dariabibi is the janani (mother) of the whole story after whom the novel has been named. Dariabibi struggles in every sphere of her life, sometime against other members of her previous family, some other times against poverty and other issues also. But despite those she does not falter from her own place i.e. the place of a mother, her motherhood. Whenever she fights, she does it for her children only – it is either for Mona, or for Amjad-Naima and Shami or for the last baby she gives birth begot by Yakub
Even in her poverty stricken daily life Dariabibi does not welcome Yakub, a cousin to Ajhar. She does not want to allow any extravagance at Yakub’s money. Dariabibi knows well that Yakub is not such a character on whom she can rely. She keeps herself aloof from all temptations by Yakub yet the sorry saga is she cannot but accept some offers when Ajhar takes up a partnership business with Yakub. Even after Ajhar’s death, Dariabibi maintains her aloofness, though there remains no alternative way before her but to receive Yakub’s monetary help and the harsh truth is she does it only for her children.

Dariabibi is mother courage through the whole book. Along with her motherly activities her courage is also portrayed in the novel with much care. Besides her, there are other mothers in the book also among whom Hasubou is the most prominent one. Hasubou is the wife of Shaker, a lathial neighbor of Ajhar’s. Her husband is a vagabond character who can only be arrested at home by a child, everyone says. But Hasubou does not conceive. The agony of her failure to have a child torments her. Once upon a time she designs to pretend the role of a pregnant mother. But how long! At last her false pregnancy gets exposed. Through all of her actions Hasubou only appears before us as a woman hungry for motherhood.
We have already told earlier that Janani is the representation of a Muslim community, though it does not mean that it is devoid of people of other communities. Maheshdanga, the setting of the novel, is a village where Muslim and Hindu people reside peacefully. Shaukat Osman gives the Muslim families space more because the Muslim people mostly inhabit the village he has taken as his setting. But the author draws the whole community in such a way, which reminds us the peaceful co-living of Hindu-Muslim people for hundreds of years in Bangali society.

There is no doubt that Janani has some flaws within it. The delicate language in which the villagers speak in the novel does not suit them. No touch of dialect is observed there. Moreover, the novel opens with a milieu of the Oahabi-Faraji Movement but later on we see the story of the novel falls much after than that period. In the main plot the importance of the beginning chapter can not be felt. On the other hand some people think negatively about the kinless Ashekjan. They want to cite Indira Thankuran of Pother Panchali (1929) by Bibhutibhushan Bandyopadhyay (1894-1950) as the prototype of Ashekjan. It is true that both the characters are childless and very sensitive to other kids, both of them are dependent on other’s family and similarly humiliated, even then similarity between the two novels is a meticulous invention of the critics. Shaukat Osman moulded this character with so much sincerity that she can easily draw our attention and rouse our hatred against the poverty and injustice of our society. The other shortcoming of the novel, some critics say, is regarding the unsuccessful development of the characters Ajhar and Yakub. But in this regard we must say that Shaukat Osman wanted to create a true Bangali mother and in doing it he has selected only those components of that mother’s surrounding that will help the true exposition of her motherhood only. In this connection possibly we can not deny the shade of Kumud of Manik Bandyopadhyay’s (1908-1956) Putul Nacher Itikatha (1936) on Rajendra of Janani. Rajendra is a son of this agrarian village society but working in the jatra (local theatre) parties he becomes pompous. In the guise of a benevolent friend he enters into the family of Chandrakotal and last of the leaves them with Chandrakotal’s widowed sister Chandramani as Rajendra did with another woman of the village some seven years ago. Or Janani may recall the novel of Manik of the same title published in 1935.

A very important feature of the novel Janani is the writer’s skillful presentation of the then Muslim society. Along with it the author has not missed the point that they are superstitious but unorthodox. Shaukat Osman has portrayed it in both individual and social life. It has also examples of situations in which the fanatics quarrel on silly affairs. But the fact is that in the core of heart Bangali people are pious but not orthodox. As a result hearing the songs of Chandrakotal when Amjad asks his father, ‘Are Vagawan and Allah the same’ at first Ajhar gets angry but after the death of Shibu and Ismail ? the mischievous results of the fanatic actions ? he gives a positive answer to his son’s repeated question.
The true details of the village life ? its people and their mind is an important aspect of Janani. The reader only gets elated when s/he discovers the novelist’s journey through this scenario. The smallest particles of rustic beliefs and their prejudices add a true colour to the novel.

In the 44th chapter i.e. the last but one chapter of the novel Dariabibi gives birth a child fortunately at dead of night – begot by Yakub. She does the whole process alone – she does not want anyone knows it but she does not want to kill it. The mystery is we do not get necessary clues in the previous chapters yet we can at the end realize that during her fight with poverty Dariabibi had no other way but to quench the lust of Yakub and she is to carry its fruit. At dawn she hangs herself.

Janani is a novel of motherhood – that motherhood which never extinguishes. From a humanitarian point of view, Shaukat Osman has dealt the whole theme. How the child is begot is never a question of significance to a mother. And for that reason Dariabibi does not kill the infant – which she could have done. Rather she kills herself to give a life to the newborn babe. And it has made the novel a masterpiece of Shaukat Osman and a major novel of the novels of Bangladesh.