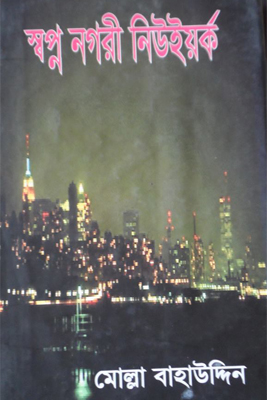 It was the late nineties of the last century. In a little magazine called ‘UtthanPorvo’ from Dhaka, a novel by an unknown writer was published. The novel ‘Simanto Sangbad’ (All About the Borders) was soon given a book format in 1998 by the editor of that little magazine, Ahmad Sofa, the eminent writer who also wrote an introduction to that novel. And thus, the emergence of a powerful fictionist Mulla Bahauddin came to the knowledge of the Bangladeshi readers. In the book fair of the same year Mulla’s ‘Kalorokto’ (Black Blood) came into light and thus his mighty pen got established in the true sense. Mulla has by now authored three novels, the forth one is in the pre-press stage, while he is now working on the fifth one. ‘Swopno Nogori New York’ (New York, the Dream Land) is his third novel where the expatriate writer sets the storyline mostly in the US city named New York.

‘Swopno Nogori New York’ begins with Anisur Rahman alias Anis at the immigration queue at Kennedy International Airport. Anis, a Bangladeshi youth, the protagonist of the novel, reaches the US as his US-based uncle sponsors him. At the outset, the writer clarifies how years before Anis’s uncle, a loved one to Anis’s mother, visited Bangladesh and enkindled the desire in him to immigrate to America. As a result, after so many years the university graduate from the English department, Anis, leaves Bangladesh to make his dream true.

The picture of the Bengali New York life is portrayed in the novel through some major characters including Bahar, his wife Bindu and Anis’s friend Lata. The novel tells about the life and love of Anis, as it assimilates many other lives as well. Loves and unloves of many insignificant characters crowd in the novel for which ‘Swopno Nogori New York’ can reach the zenith of a totality, not merely of an individual’s own experiences.

This novel is a first-hand documentation of the wail and woes of the immigrating Bengali community to the unknown foreign land. It sketches how the people of the South Asian small nation called Bangladesh adapt themselves with the new life and new system, how their age-old dreams are shattered and new dreams come up.

The novel provides us much catchy information about the expatriate Bengali life. Through Anis’s exploration of US life, we learn about their first arrival around 1770s. The novelist also gives a chronological history of their arrival generation after generation. Eventually we learn about Taraknath Das, Prafulla Chandra Mukhopadhyay, Dhangopal Mukhopadhyay et al.  And the authority of Mulla is he connects the far past with the recent ones as well. Thus we can know about the related events during the Second World War till the Liberation War of Bangladesh. We can know where and how Bangabandhu, the Father of the Bangladesh nation, would stay during his America days.

Mulla has incorporated more historical information in his fatty novel.  How ‘Sangbad Bichitra’, a newspaper, started its journey in 1971, how the other newspapers began to emerge gradually, how a literary organization started working in 1992, who people were associated with that during the first years, how the first Bengali football team came up in 1988 in New York, how the first Shaheed Minar was set up there, so on and so forth.

To many, a question may arise if all these infos can be worthy for a fiction! Some may advise that Mulla could write a book of essays than a novel. In this regard, the present reviewer’s observation is that Mulla is a true fictionist and so he has been able to incorporate all those in the plot and story of his novel.

‘Swopno Nogori New York’ wraps up after six years when we see Anis waiting at the Kennedy International Airport for his mother’s arrival. Now Anis, the youth who arrived in the unknown western world as a novice in 1992, is happy because he has attained the power to sponsor his mother for whom he has waited for years with unending tears. But very unexpectedly the joyful moment turns sad as Anis discovers his friend Bahar leaving the US for Canada on the same day.

From ‘Swopno Nogori New York’ a reader can guess how creating of small groups smash the whole community issues and interests of the Bengalis in the foreign land. Readers can realize how creating many divisions through different opinions has been a common feature of the Bengali community across the American states.

Excepting ‘Simanto Sangbad’, Mulla has always picturized his very autobiographical experiences in his novels. ‘Kalorokto’ is the delineation of his Saudi life. His readers are eagerly waiting for his oncoming voluminous novel ‘Dur Digonter Paane’ (Towards the Farthest Horizon) based on his experiences on his personal childhood and youth.  The happiest news is Mulla is now working on a novel named ‘Sukher Sondhane’ (In Search of Happiness) based on his Canada experiences.

We can foresee that the author has extensively used autobiographical elements in his novels but Mulla’s craftsmanship reaches the line of success as he can utilize them in a fictional way. His insertion of true elements through fictitious characters helps create a more believable milieu for the setting. Thus the novel deserves an English translation which will help the American non-Bengalis understand the nerves of the Bangladesh community living in New York and other cities of the US. I believe knowing about this huge community is now a demand of the day for the main stream Americans too.

Herewith it could be noted that Mullah has developed much skill in writing short stories too. In 2008, Mulla’s anthology of short stories ‘Rajakarer Jobanbondi’ came out. His other short story books include ‘Romonthon’, and ‘Bibisab’.

No doubt ‘Swopno Nogori New York’ is an excellent documentation of the American Bengali life. If a history is ever written on the arrival and life of the Bengali community in America, this book will, for sure, be most wanted document.