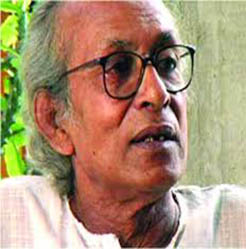 It was 2:00 on the afternoon of 21 July when I got a phone call. It was Dr. Tapan Baghchi from Ekushey Television. He told me that Mahmudul Haque had died, mentioning that the writer was on my website. Later I made a text on the sad demise and began sending it. Since the death had occurred around 2.30 in the morning newspapers were unable to cover the news that day. I received calls asking who this Mahmudul Haque was. While mentioning Jibon Amar Bone was helpful to some, I kept wondering: How could people not know Mahmudul Haque, somebody who wrote novels such as Onur Pathshala, Nirapod Tondra, Jibon Amar Bone, Kalo Borof, Matir Jahaj, Khelaghar and Oshoriri? Since his death many of his writer-friends are writing in the nation’s dailies about Haque’s popular presence among them. But was it really so? I do not know and never wanted to know.

I first read Mahmudul Haque’s writings when I was a backbencher at Rajshahi University. His Onur Pathshala, Nirapod Tondra, and Jibon Amar Bone drew me as I discovered something uncommon in his writings. Those days I was searching out writers who were not on the popular track, which was how I discovered Kamalkumar Mazumder, Amiya Bhushan Majumder, Ashim Roy and Shamsuddin Abul Kalam. Perhaps this was why I found a writer whose books are rarely available in book stalls and still more rarely read by the literati.

During the 1990s when I began writing on Bangla novelists, I collected all the books by Mahmudul Haque. An article was published in Muktokontho newspaper (in ‘Khola Janala’, its formidable literary page) in 1998, where credit goes to poet/editor Abu Hasan Shahriar, who first really introduced Mahmudul Haque to readers. It has to be noted that very few write-ups were published on Mahmudul Haque during his lifetime. The Daily Star published my ‘Novels of Mahmudul Haque: An Overview’ in February 1999. I’m telling all these because I could not personally get to talk with Mahmudul Haque, and thought that if these writings attracted his attention, perhaps he would search me out. In October 2003 I included a page on him in my website. I reviewed his last book Oshoriri in the May 2004 issue of the literary journal Kali O Kolom. But he remained unreachable!

To me the writer over these years, in the photos published in daily newspapers, turned from a tall figure with a young face to one with wrinkles. The eyes grew weaker, the spectacles thicker. His Punjabi remained the same, though. The 22 July editions of newspapers displayed a more elderly face. Sometimes my literary acquaintances would talk of their addas with Mahmudul Haque at his home, which coincidentally was in Jhikatola, where I myself have lived for about 20 years. But I never did get to visit him, never got a call from him. Now he’s gone forever!

Mahmudul Haque began writing in the 1960s. He wrote his first novel Jekhane Khonjona Pakhi (later on renamed as Onur Pathshala) in 1967. If we take a look at the years he published his novels, it gives us a better idea about the long period of his later silence. Nirapod Tondra in 1974, Jibon Amar Bone in 1976, Kalo Borof in 1977, Matir Jahaj in 1977, Khelaghar in 1978. Oshoriri is around 1980. Later editions of his novels continued to appear; for example, in 1988 Khelaghar, in 1992 Kalo Borof, in 1996 Matir Jahaj and in 2004 Oshoriri. He also wrote one volume of short stories Protidin Ekti Rumal and a book for juveniles Chikkore Kabuk. Mahmudul Haque took up writing when he was about twenty-five and left it when he was only forty, a span of fifteen years. Though he lived for twenty-five more years he never wrote again.

Readers may find Onur Pathshala, the debut novel of Mahmudul Haque, mysterious. The conventional trend of writing stories in the guise of a plot does not appear in him. The novel delineates Onu’s childhood as he goes through many new experiences. Readers curious about the writer’s early days may try to find parallels in Onu’s life. Onu, unloved and uncared for, is pushed into the company of some urchins who impact his life in a violent way by many unknown realities of life. Haque’s second novel Nirapod Tondra tells us of Hiran. Setting out from her father’s house in response to a call by her fiancé, Hiron flees from her village home but all her efforts end in vain and finally she winds up changing her male partners. Mahmudul Haque wrote a different novel in his next Jibon Amar Bone, which illustrates the inner and outer world of a young man named Khoka. The timeline of the story of Jibon Amar Bone is set right before the liberation of Bangladesh, where the first person narrator is Poka (alias Professor Abdul Khalek) telling about the happenings of his childhood and boyhood. In Kalo Borof, however, a third person narrator picks up the story, talking about Khalek’s present life, and thus the tale achieves a new dimension. These two stories of the same person proceed in alternating voices, with the intermingling of the past and present creating a sharp sensation in readers’ minds. In Matir Jahaj, the protagonist Joynal trades in women. He and his aide Monohar Ali undertake numerous ventures that end with the case of Kusum, a beauty. Mahmudul Haque draws his characters with excellence and the story ends in human love, whereas in Khelaghor love of divinity is also a focal element. In Oshoriri, our liberation war is also traced as it is in the earlier Jibon Amar Bone and Khelaghor, but Mahmudul Haque’s originality lies in his very different treatment of the theme.

Mahmudul Haque’s unique use of language lay in simplicity of diction. He disliked difficult language, and disliked writers who wrote in such a vein, no matter how great. But that didn’t mean that Mahmudul Haque used language in a conventional way; rather, his language was weighted with more meaning, with unusual flavours. Popular story-telling never entered in his fictions, which is why he could not reach the majority of Bangla readers.

“Can we expect a more spacious novel with loftier ideas from this apparently silent author in the future?” I questioned some ten years back. After all this time one sees that expectations remained unfulfilled. But Mahmudul Haque nevertheless will be remembered in our literature history books for a long time.