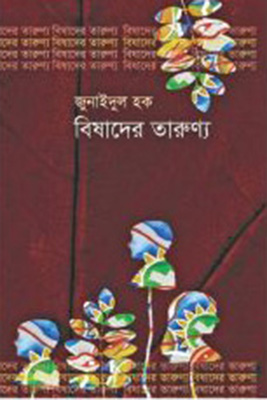 Junaidul Haque mainly writes short stories and essays on literature and culture. But he is up to the mark as a novelist too. His Bishader Tarunya is quite good as a first novel. He is a natural writer. He has trained himself well too. The novel is short but of a high quality.

Bishader Tarunya begins seemingly abruptly. It seems that we are in the middle of the story. Then the writer slowly but surely unfolds everything. The characterization is simple but attractive and exposes various social eccentricities, tricks and the many faces of man-woman relationship. Even the thought of feminism is there.

The male protagonist is Khairul, who is well-educated and thoughtful. Various incidents of his life unfold with the passage of time. He works in an international NGO but he is capable of working in better places. He is an idealist and is not ambitious. But this creates problems for him. He cannot marry the girl he loves.

Love comes inevitably in life. But Khairul is facing a crisis. Shamima’s mother would prefer a more established son-in-law. Shamima herself is unhappy at his inability to get a respectable job. In our society this crisis is well-known. But Sonia, the beautiful, intelligent and inspiring friend of Khairul, encourages him to face his problem courageously. She wants them to marry soon. Sonia showers a lot of affection on lonely Khairul on his birthday. She likes him a lot. He is very fond of her too. Both of them like to read a lot and write. Sonia even paints.

Shamima’s hesitation is very realistic. A middle class girl seeks security and respect. Frustration meanwhile forces Khairul to almost fall in love with Sonia. But the latter’s firmness saves all of them from a deeper crisis. She sends Khairul to meet Shamima and patch up. He tries his best to convince her to marry.

Sonia and Khairul talk merrily and delightfully in the office. They are very witty. Sonia playfully tells Khairul that if Muslim males can marry four times, why can’t girls do the same? They need a ‘husband’ to clean the house, one for shopping, one for cooking and one as the real husband. The writer shows feminist sympathy and sides with millions of women who work hard both at home and in the office. He does it artistically.

The novel ends in an interesting manner. Khairul returns home at night. It is a journey from war to peace, from insecurity to security, from melancholy to optimism. Love of his mother and his siblings soothe Khairul’s weary soul.

The writer asks a question at the end: Are twentieth century people born to suffer only?

Khairul is dreaming of a happy spring after a sad winter for Shamima and himself. Sonia emerges as a great friend, intelligent and considerate, idealistic and utterly likeable.

Junaidul Haque has a lucid prose. The reader thoroughly enjoys reading the interesting novel. Here is serious fiction which is very readable at the same time. Sanjay De Ripon has drawn an excellent cover.

We expect a bigger novel from the writer soon.

Abdur Rahman is a teacher and writer.