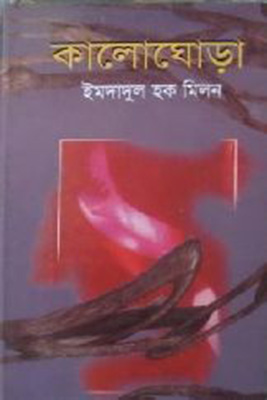 Imdadul Haq Milon (b 1955) is one of the most popular writers of contemporary Bangla fiction. His popularity is mainly for his love-stories. A huge number of his novels deal with human love between men and women in which he has demonstrated the topic in real like situation with a more practical diction and feeling. By his more than one hundred novels he has created himself as a legendary fictionist in the fiction writing world of Bangladesh. But beyond these mostly trivial books, that the teenage people are fond of, he has written some novels where his true genius gets exposed. Some such serious novels are: Jabojjibon (The Whole Life, written in 1976, published in 1990), Nodi Upakhyan (The Story of Nodi, 1985), Bhumiputro (A Son of the Soil, 1985), Kalakal (Proper or Improper Time, 985), Poradhinota (Subjugation, 1985), Rupnagor (A Place of Love, 1988), Rajakartontro (Time of the Collaborators, 1990) etc.

Milon started writing at a very early age – when he finished Jabojjibon he was only twenty-one. But the fact is that novel drew any serious reader to him. The novels that he wrote during the later years of the seventies were published in the eighties or much later. He wrote O Radha O Krisna (Krisna and his Fiancée Radha) in 1977 (published in 1982), Duhkho Kasto (Pains and Sufferings) in 1998 (published in 1982), Uponayok (The Second Hero) in 1979 (published in 1990) and in 1980 he wrote Kaloghora (The Black Horse) which possibly did not see the individual two cover form.

Kaloghora is set during the time of liberation war. The novelist does not make the novel in a very traditional story-telling way; neither does he make any of its character prominent. Rather he wants to illustrate a scenario of our liberation war in a smaller scale where Ratonlal, Nayona and Tuntuni, younger wife of the Chairman play very vitally. The other vital characters are Kader, Monna, Alam and Khoka – the four freedom fighters. What Milon wants to present in the novel is the patriotic spirit of the freedom fighters and their despair immediately after the war.

The novel opens with Ratonlal, a small sweet trader who is a Hindu by religion. The two helping hands of his shop are – Nayona and Barek. Ratanlal is the father of Kali, a sixteen-year-old dumb girl. When the story opens, the country is experiencing the time of liberation. All the people of the locality are fear-stricken. The Pakistan Military has set up a camp in the nearby bazaar. Siraj, the Chairman of the Union Parishad, has begun his work as the pioneer of the oncoming Shanti Bahini i.e. the collaborators. During this tumultuous situation Milon sets his story.

The main story line proceeds with the freedom fighters named Khoka, Alam, Monna and Kader. They have started their endevours in killing Pakistan army and their Bangali collaborators. In performing their works imposed on them, they take help of the younger wife of the Chairman. Tuntuni hails of the some village, from where Monna hails. When Monna and his group need any information, they contract with Tuntuni who collects them from the Chairman.

Were there any relationship between Monna and Tuntuni. Yes, they had relations in her pre-marital life, but she cannot forget her. From her the freedom fighters got the information of the oncoming arrival of the Pakistan Army in the village. But when the evil deeds of the Chairman initiate the killing of the Chairman, without thinking a little about the sorrows of Tuntuni for losing her husband, Monna takes a quick decision.
What plays does Chairman plays? He beats Nayona so cruelly that till Nayona does not die he does not stop. He violates Kali, the daughter of Ratonlal for which Kali drowns herself in the nearby pond. Moreover he beats his wife Tuntuni. On the day Nayona dies Chairman, at a point, exposes that if the freedom fighters enter the village, he will inform the Pakistani military about it. For which Tuntuni feels hatred to her husband and when the Chairman wants to sleep her she denies. Thus the situation reaches its climax.
Tuntuni is really a very interesting character in this novel. She is a beauty, but she is very common like any other girl of the village. But the point is she also understands that liberation war is right, which her Chairman husband denied. As a result she helps the freedom fighters as much as she can. She gives them money and food as well as she provides them secret information collected from the Chairman. Thus the motherland takes a upper place to her than her husband.

The others interesting character of the novel is Nayona. He is a mere boy of tender age but when he helps the freedom fighters, we see him in a more strengthened character. Ignoring all possible dangers, Nayona gives shelter to the four freedom fighters at Ratanlal’s shops at night. Later on when the Chairman guesses about this, Nayona does not lick out the news even after being beaten to death. Thus his role becomes a noteworthy part in the novel and Kaloghora emerges as a significant novel in respect of juvenile role in our liberation war.
There remains no doubt that the episode of Ratonlal and his daughter Kali is very touchy. Though Ratonlal is a typical character of a miser tradesman of our society, his love for his daughter can soften any mind. Earlier Ratonlal was more conscious and cautions of his shop and financial matters, but after the death of Kali we see him a changed man.
But above all these things Kaloghora demonstrates the post-liberation vacuum in a very precise but penetrating way. It brings a very misty environment over the whole nation. Khoka, who was the leader of the four freedom fighters, tells his friends, “I can’t tolerate anything. Today my mother told me to do something. But what can I do?” – it was really a very vague situation. They do not have anything to do for which the freedom fighters decide to go to Dhaka and earn money by robbery because they have already heard that a good number of freedom fighters got involved in similar activities.

Kaloghora is not a great novel, neither it is a master piece of Milon himself. But it is a very good instance of Milan’s capability to write good novels. If anyone peeps into his Jabojjibon, s/he will observe the well-planned plots, serious themes, artistic presentation and diction, experiment with narratology and many praiseworthy aspects in it. These literary features were very available in Milon’s early novels for which he will be evaluated for long. In this phase Milon wrote many novels like Gherao (1985), Nirapotta Hoi (1988), Mohajuddha (1989), Baloker Obhiman (1990) etc on liberation war. Later on he turned to novels comprising stories about his story in foreign countries. His readers also hailed his presentation of the overseas life of the Bangalis. But the tragedy lies in the fact that he has earned his popularity for his love-novels. Trivial love stories have given him so much acquaintance that gradually he has turned from his serious writings. But surpassing all these, Imdadul Haq Milon can prove himself – his recently published voluminous novel Nurjahan can be cited as a worthy instance.